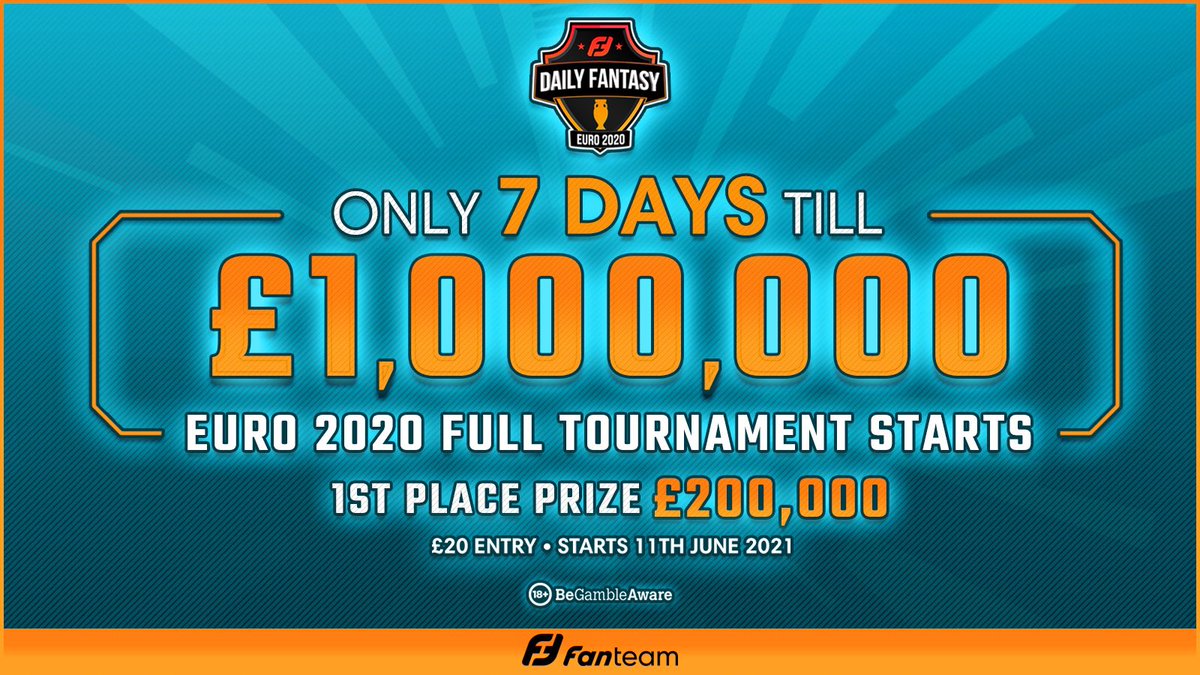 FanTeam.com are hosting a record-breaking Euro 2020 Fantasy Football Tournament, which has a minimum guaranteed prize pool of £1,000,000 and a guaranteed first place prize of £200,000.

FanTeam decided to launch the contest early to capture the attention of existing and new users and give them something to look forward to – plus, they have a habit of launching contests super early and going against the grain, so why would they stop now?

Below you will find all the information you need to know about the £1M EURO 2020 Fantasy Tournament game. Including Game Rules, Scoring and Prize Pool breakdowns – as well as information about the Gameweek/Round deadlines, transfer rules, official fixture schedules and much more.

YOU HAVE A STARTING BUDGET OF 105M TO BUILD YOUR INITIAL TEAM.
BUILD A SQUAD OF 15 PLAYERS, CONSISTING OF 2 GKs, 5 DEFs, 5 MIDs and 3 FWDs.
YOU CAN SELECT A MAXIMUM OF 3 PLAYERS FROM ONE TEAM IN GAMEWEEKS 1, 2, 3 & 4 – A MAXIMUM OF 4 FOR THE QUARTER FINALS AND 7 FOR THE SEMI FINALS AND FINAL.
YOU CAN MAKE UNLIMITED CHANGES TO YOUR TEAMS UNTIL THE EURO 2020 CONTEST STARTS AT 20:00GMT/21:00CET ON JUNE THE 11TH.
FROM GAMEWEEK 2 ONWARDS, THE GAMEWEEK DEADLINE FOR TRANSFERS & TEAM-CHANGES WILL BE 90 MINS PRIOR TO THE FIRST KICK-OFF.
PLAYER PRICES CAN RISE & FALL BASED ON FORM AND IN-GAME TRANSFER ACTIVITY. DAILY PRICE CHANGES OCCUR BETWEEN 23:00GMT & 01:00GMT.
ALL PLAYER PRICES WILL BE FROZEN WHILST THE GAMEWEEK 4 WILDCARD IS AVAILABLE FOR ALL USERS BETWEEN SUN 20TH TO SAT 26TH JUNE
A PLAYERS’ SELL PRICE IS THE SAME AS THEIR BUY PRICE.
CHOOSE A CAPTAIN & VICE CAPTAIN EACH GAMEWEEK. YOUR CAPTAIN WILL SCORE DOUBLE POINTS & YOUR VICE WILL SCORE DOUBLE IF YOUR CAPTAIN DOESN’T PLAY.
YOU HAVE 1 FREE TRANSFER IN BOTH GAMEWEEKS 2 & 3. ADDITIONAL TRANSFERS WILL COST 4 POINTS EACH.
YOU CAN SAVE (ROLL) A MAXIMUM OF ONE FREE TRANSFER BUT NEVER HAVE MORE THAN 2 FREE SAVED TRANSFERS.
YOU HAVE ONE WILDCARD AVAILABLE TO USE FOR GAMEWEEK 4 (ROUND OF 16) ONLY. YOU CANNOT SAVE (ROLL) YOUR WILDCARD.
YOU HAVE 3 FREE TRANSFERS AVAILABLE IN BOTH GAMEWEEKS 5 (QF) AND 6 (SF).
LATE REGISTRATION IS OPEN UNTIL GAMEWEEK 2 KICKS OFF ON WEDNESDAY 16TH JUNE 14:00GMT. LATE REGISTRATION TEAMS START ON 100% OF THE GAMEWEEK 1 AVERAGE.
ALL SCORING IS FOR 90 MINS + INJURY TIME ONLY. EXTRA TIME & PENALTY SHOOTOUTS ARE NOT INCLUDED.
NO TRANSFERS CAN BE MADE AFTER GAMEWEEK 6 (SEMI FINALS).YOU CAN, HOWEVER, CHANGE YOUR FORMATION, BENCH ORDER & CAPTAIN/VICE CAPTAIN.
THE BUDGET MAY INCREASE AFTER GAMEWEEK 3, DEPENDING ON WHICH TEAMS ARE STILL IN THE TOURNAMENT. BUDGET INCREASES WILL BE ANNOUNCED WHEN QUALIFYING TEAMS ARE KNOWN.

A full breakdown of our official Euro2020 tournament scoring system is provided below. If you have any questions regarding our scoring system, please reach out and we’ll be happy to help.

A full breakdown of our official Euro2020 £1M prize pool breakdown is provided below. If you have any questions regarding our payout structure, please reach out and we’ll be happy to help.

LINKS TO OFFICIAL SOURCES OF INFO AND INTEREST