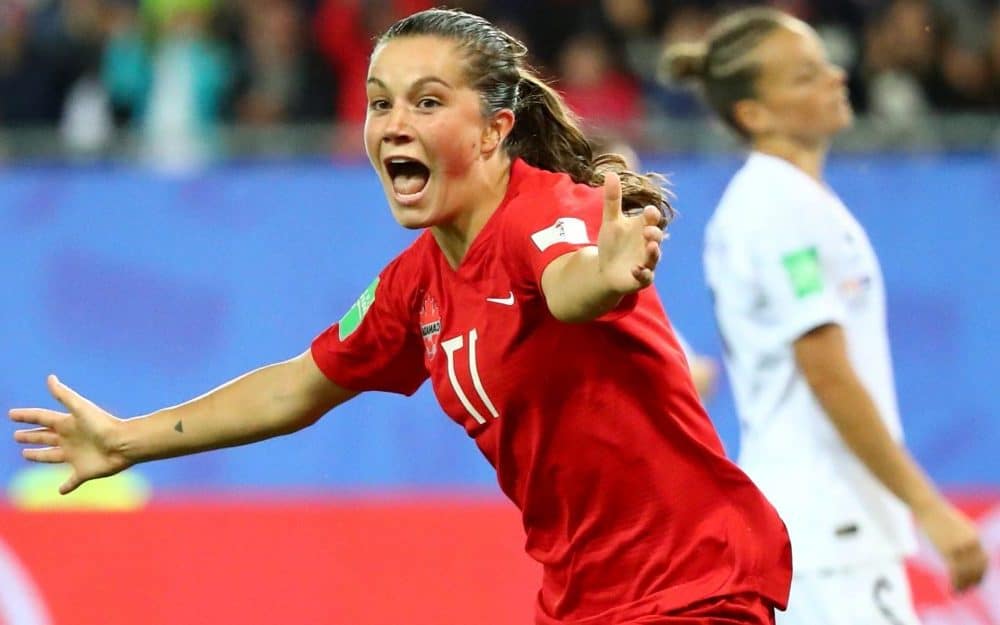 The 8th Women's World Cup in France runs from June 7th through to July 7th. This article provides 2019 Womens World Cup Predictions from Group Stages through to Final team tips and score results.

In group A I have the host nation France on top. I've got them winning three games and claiming a perfect nine points. I think the fact that Otto Hagar Berg won't be there for Norway will make a difference against France. However they're not just a one-trick pony so they are second in this group for me. I still like France though. I just think that France and Norway are really the cream of the crop in Group A.

Group B as you can see I like the Germans so they've got the experience the reigning gold medalists at the 2017 Olympics Jennifer Marsh I'm pulling the strings for Martina Voss tech Limburg side I love Germany and their chances here to win.

Group B Spain's gonna be tough though they were perfect in European qualifying not even Germany could say that 2018 Spain their u-20 team made the World Cup final and their u-17 team won the World Cup so a lot of young talent that's about to be coming through the ranks for the Spaniards.

China we know about their great World Cup track record making the Quarter Finals in 2015 and of course you know final back in 1999. I just feel like they're inferior to Germany and Spain this time around.

Group C should be fun I've got Australia on top for 3 wins out of 3 matches 9 points just like the French.

Australia's made the Quarter Finals at the last three World Cups. I think they're gonna have to win this group to set up a a more favorable path in the knockout stage so I've got them winning and then perhaps maybe a little bit of an upset here Italy I've got them drawing Brazil. So they will be level on points with the South Americans Brazil. Though still finishing in second due to goal difference.

Brazil we know about their great players players like Marta Formiga Christiana they are getting old though so I worry about that for Brazil moving forward.

Italy on the other hand they're a team kind of more on the rise. They could be one of the surprise teams at this World Cup.

Group D is really the one group where I'm going against the grain here I think this will be the most competitive group I can't wait to watch some group D matches.

England I do have them as the top dog they did beat Scotland 6-0 at Euro 2017 so I've got them beating Scotland again.

As for the Scotland Japan matchup though I've got Scotland winning. I'm banking on Shelley Kerr and Kim Little shocking the Japanese. Japan for me they've always been a team that is technically so strong but I think they lacked just a bit physically. Argentina they've got a quality side too and zero point seems cruel for them. I think they could they could make some results happen as well but you know it's just kind of a shake of a hat here England first then Scotland then Japan then our Argentina group D is gonna be a certainly a lot of fun.

Then in Group E for me all eyes will be on Netherlands vs. Canada that's gonna be an awesome rematch from the 2015 World Cup when they played in the group in Canada. Despite some shaky results in friendlies they're gonna be confident.

It could be Christine Sinclair's last ride for Canada. We know about Canada how talented they are in the new zealand they're gonna be tactically pretty strong under Tom sirmione so a lot of fun things in this group as well. I'm so high on Neverland I'll talk about them more in the knockout stage but they've got a lot of offensive firepower and I think they're able to topple Canada and be at the top of Group E.

As for Group F there is a time to be daring a time to put your stamp on the sports world. USA is the number one team in the world for a reason they they have the best roster in the world in my opinion. I've got them winning Group F three wins. I also love Sweden though that blend of young and old talent new coach I think probably 10 or 11 teams could hypothetically win this tournament. Sweden certainly one of them and I've got both of those teams coming out of Group F.

So as I turn to my knockout stage bracket now this is where it gets really fun. We've got my 16 teams that I have advancing to the knockout stage and we start off at the top Norway vs Brazil. These are always fun matchups in the the knockout stage. Just the ability for these matches you know they can go to overtime and maybe penalty kicks they're always so nerve-racking always so fun.

So Brazil Norway. I think Brazil will be upset in the round of 16 again just like they were against Australia in 2015. The lack of depth will hurt Brazil.

Norway even without Hagar Berg I think they're able to beat Brazil. My second elimination game then England versus New Zealand.

This is an easy choice for me England is made the semi-finals at the most recent World Cup and the most recent European Championships. I think they're an even better side than they were four and two years ago under coach Phil Neville.

So I have them beating New Zealand to nil.

France against Italy I've got the hosts putting on a footballing extravaganza. Beautiful soccer will be on display here they win against the Italians three to one. Let me get to USA Spain they've already played these two squads in 2019 in Alicante back in January.

USA only one that in January it's not gonna be easy but I think Spain's a great team they just lack a bit of a bite in the final third there midfield engine is fantastic they do lack though a true number 9 and that will hurt them in the end. They won't have as many chances as they need to take down the United States.

Australia vs South Korea will be the Sam Kerr show. The Korean defense that has been so staunch will finally fall. I've got the Aussies putting up a massive four goals in that one.

The Netherland takes care of business in a thriller against the Scots here's a good one then Germany Anja and two of the four World Cup champions these are legendary programs. Germany an absolute machine. I think it goes to extra time two to one the Germans win. I'll say an Alexander  header in OT gets the job done.

As for my final round of 16 tie Canada vs Sweden. I'm torn on this one an absolute toss-up this is 50/50 for me. Canada I want Sinclair to break the all-time goalscoring record at this event she's got 180 right now for behind Abby Wambach for the all-time mark men or women I hope I think she's gonna get at this tournament she wants to get though they've gotta win this match and give her an extra game to get that done. So I've got them defeating Sweden in an epic penalty shootout.

in that first one Norway versus England that's a rematch from the round of 16 in Ottawa in 2015. I think England keeps marching on. They'll beat Norway 3-0.

As for this next quarterfinal between the USA and France it's a bit of a shame that this is coming in the quarterfinals. Potentially if these two teams both win their groups like we think they should this is how it's gonna be. So unfortunately if they will not meet in the final likely quarterfinal match up here and I've got the USA winning 1-0.

These two Titans you know again they've got the best odds each of them around three to one ish on most markets it's gonna be two colossal Titans just duking it out. But give me the edge to the USA.

Then of the game of the tournament the Netherlands will triumph over Australia hopefully this is all offense no defence you've got Sam Kerr against Lika Martin's on the speed of Shanice van de Sandin and well at least davana you've got Emily Van Egmond, Daniel van der Donck so many good front six players.

I think this is the match though when the world will kind of recognize that the Netherlands is truly for real. I'm so high on them the front six is so potent even though they they lack some things in the back five. This is the team that's gonna be adventurous and creative and get up and down and make things happen. I'm very high on this Dutch side and I've got them beating Australia 3-2 in a classic.

Germany Canada – both teams will be very fatigued after you know each of the round of 16 clashes go the extra distance. Germany I just think they eat out the result a slightly more classier team than the Canadians.

So my four semi-finalists England the United States, the Netherlands and Germany.

For that first semi-final match of England United States a classic matchup lots of familiar faces you've got a great player for the English side Lucy Bronze one of their full backs who went to the University of North Carolina knows a lot of these players. On the United States very well there's just a lot of you know familiar ties there with that matchup and I think it'll be a great match.

England definitely wants this opportunity they've met this year and a friendly in the United States and that was a so so result. I believe I think the USA beats them though this time three to one then on the other semi-final Netherlands vs.Germany. This is just another tough matchup both teams it's gonna be grinding and physical there's gonna be drama there's gonna be controversy just two European juggernauts going at it and I'm very much looking forward to this one.

We can only hope we get 120 minutes maybe more with this matchup. Give me the Netherlands though to win in penalties against Germany.

Netherlands will reach their first ever World Cup final and as you can see not too crazy of a prediction but I am going with the United States to win the 2019 World Cup and become back-to-back world champions. They will beat the Dutch 2-1 in the final I think.

Megan Rapinoe will score first in the the 54th minute I wrote down then Lika Martens will equalize for the Netherlands in the 68th but Lindsay Haren I've got hip hip hurrah as the the game-winning goal there in the final.

So USA over the Netherlands for me again please let me know who you've got winning the World Cup I'm so excited I don't even care if the USA wins it. I don't I just want to see some awesome women's soccer.

I'm so excited about the growth of women's football around the world and its really great this will be the 8th edition of the World Cup Finals for the women.