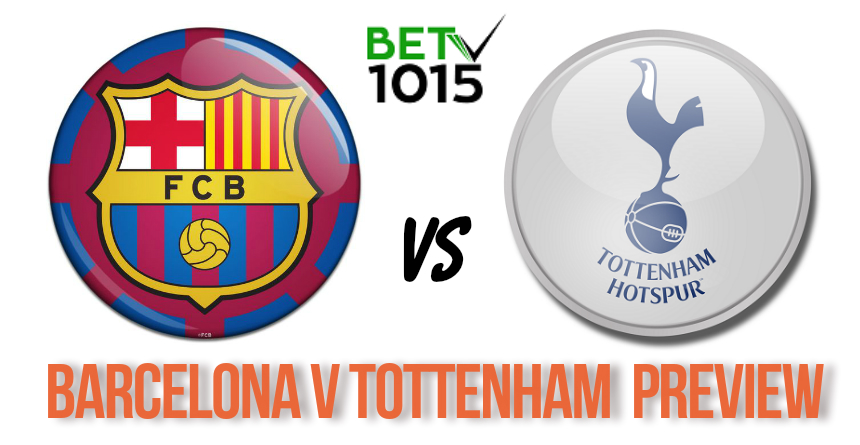 * The Barcelona V Tottenham Odds are taken from online bookmaker Betsid and were correct as of 01/12/2018 – subject to change.

Barcelona V Tottenham Where To Watch

Visit bet365 for football online streaming. You need a funded account or have had a settled bet in the last 24 hours to qualify for watching sports streaming free.

After being demolished in the first leg Group encounter at the Wembley in October, the Spurs travel to Barcelona mid-week for the return tie that will be their final outing in the Group B cluster of the UEFA Champions League (UCL).

READ
Liverpool vs. Burnley Preview & Correct Score 21/01/2021 - Reds back on the Scoresheet against Clarets

With the Catalan giants already into the Round of 16, the North London club will be the ones who will have to take the game to the Spanish champions.

The Spurs have been dealt a blow at the back after Serge Aurier sustained an injury in his side's 0-2 win over Leicester City on Saturday. Joining him on the injury list is England full-back Kieran Trippier after a recurring groin injury.

Both Aurier and Trippier are set to miss the trip to Nou Camp. Coming in for the injured Aurier will be 21-year old Kyle-Walker Peters who will have the daunting task of facing up to the likes of an in-form Ousmane Dembele, Luis Suarez and Coutinho.

The Spurs defense could be spared from the wiles of the extraordinary Lionel Messi, who coach Ernesto Valverde may choose to rest on Tuesday given that the club has already qualified for thee next stage.

The Blaugrana will be without right-winger Malcom, their €45 million import from Bordeaux. The 21-year old Brazilian, out with an injured ankle early in the Espanyol game, has been in and out of coach Ernesto Valverde's team since arriving from France. Sergi Roberto and Samuel Umiti are the other two long -term injuries at the back.

READ
Who is predicted to win the Premier League?

In the absence of these two, Nelson Semedo and Clement Lenglet have been minding things at the back along with club veteran Gerard Pique and Jordi Alba.

Except for the 2-4 defeat to Arsenal at the Emirates, Tottenham have been in good form winning all the remaining 7 games since November in all forms of competition that includes a 3-1 win over Chelsea at the Wembley.

Forwards Harry Kane, Del Alli, Lucas Moura and even Son Heung-Min (getting a goal each in three back-to-back games) have all been in sublime form of late.

Star player Christian Eriksen's form has been a bit of the concern for Mauricio Pochettino with the Dane getting just two goals in the season so far from his 15 outings.

The Spurs' progress into the next round of the UCL will depend on how the Inter Milan – PSV Eindhoven match pans out.

Both Tottenham and Inter are on identical points in the 2nd and 3rd place of the cluster respectively, but the London club has a better goal difference.

The Spurs in the kind of form they have been in of late will have to make the most of a slightly depleted Barcelona side at Nou Camp.

READ
Liverpool vs. Burnley Preview & Correct Score 21/01/2021 - Reds back on the Scoresheet against Clarets

But even that's not easy as it seems. A win is a must for the English visitors if they are to qualify from this Group, for it looks almost certain that Inter-Milan would collect three easy points against table bottom-scrapers PSV Eindhoven on Thursday.

Bookmakers are wagering even on a less-than-full-strength Barcelona to win December 11th's night game at Nou Camp.