Home Football betting Brazil vs Belgium Match Review and Result: Belgium knock out Brazil, to meet France in the Semis
1.

Brazil vs Belgium Match Review and Result: Belgium knock out Brazil, to meet France in the Semis 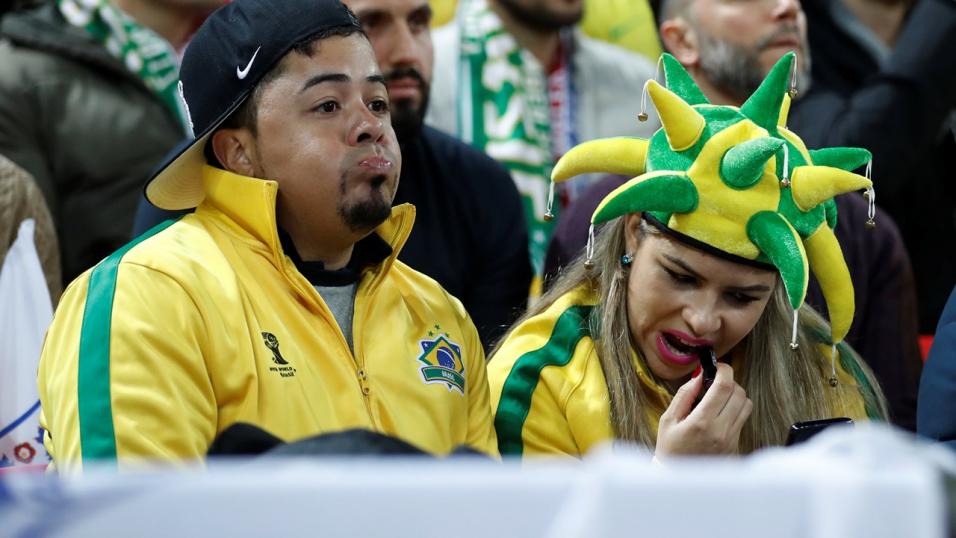 The Belgians put on a masterclass to knock out 5-time World Champions Brazil and ensure an all-European semi-final in Russia 2018.

Belgium, who had reached the Last Four way back in 1986 registered their fifth straight win of the tournament at Kazan on Friday night. The reputed Brazilian defense led by Thiago Silva that had conceded just once from their past four games fell back early in the game in the 13th minute itself when Nacer Chadli's in-swinging corner kick glanced Fernandinho's arm and flew into the net for an own goal.

The Belgians survived anxious moments before that when Thiago kneed one against the post and Paulinho missed a well-placed kick that he could have put in from a hand-shaking distance.Belgium coach Roberto Martinez started with the substitute heroes of the Japan game Marouane Fellaini and Nacer Chadli and adopted a 4-3-3 formation that had Kevin De Bruyne playing a False Nine and Romelu Lukaku and Eden Hazard operating down the flanks.

De Bruyne was seen dropping deep and essaying lethal through-passes, one of which was delivered to Fellaini whose scuffed shot yielded the Chadli's goal-producing corner in the 13th minute.

The Belgians were absolutely dangerous on the breaks. With half-an-hour of play gone, Lukaku pounced on loose ball inside his own half, ran forward at great speed beating Fernandinho and Paulinho and essayed a neat pass to De Bruyne in the middle. The Manchester City playmaker measured his strike and sent one screaming past goalkeeper Alisson to the right hand bottom corner of the net. Brazil under coach Tite were for the first time down by a couple of goals.

It was quite natural to expect a Brazilian wave of attacks after that. The Red Devils endured that for almost the entirety of the game in the second half, putting bodies in the line with the likes of Thomas Meunier, Vincent Kompany, Toby Alderwield and Jan Vertonghen taking in whatever the Selecao had to throw at them. The Brazilians came close to scoring but were also deprived from some phenomenal goal-keeping by Thibaut Courtois. One that took the cake was a quick Neymar curler heading to the top corner that the Belgian custodian showed incredible reflexes in pipping out.

Brazil's 27 attempts didn't produce goals from their scoring mainstays Neymar, Coutinho, Jesus or Firminio but it came from an unlikely source.

Late substitution Renato Augusto scored within 4 minutes of his introduction in the 76th minute when a Coutinho pass found him unmarked inside the box and all he had to do was tap in a header for Brazil's first and only goal of the game. Despite the Brazilians swarming the rival goal, the threat of a Belgian counter-attack always lurked.

Hazard and Lukaku tore down the flanks at regular intervals with the former's vicious left footer missing the Brazilian goal by a couple of inches, the keeper Alisson completely beaten. Lukaku, cutting open the rival defense with his pace, came close to putting the game completely out of the Brazil reach, missing two good opportunities to score in the second-half.

Neymar, bereft of his histrionics, was effectively marked by Thomas Meunier. The Brazilian talisman was at the forefront of his team's final push in search of an equalizer but it was the sudden hit-on-the-breaks policy adopted by the Belgians that mitigated the force behind the South Americans' last minute push. It was the same old story of them being eliminated by an European side in the knock-outs (France in 2006, Netherlands in 2010, Germany in 2014 and now Belgium).

The victorious Red Devils meet France in the semi-finals on the 10th of July in what can be expected to be an European classic.