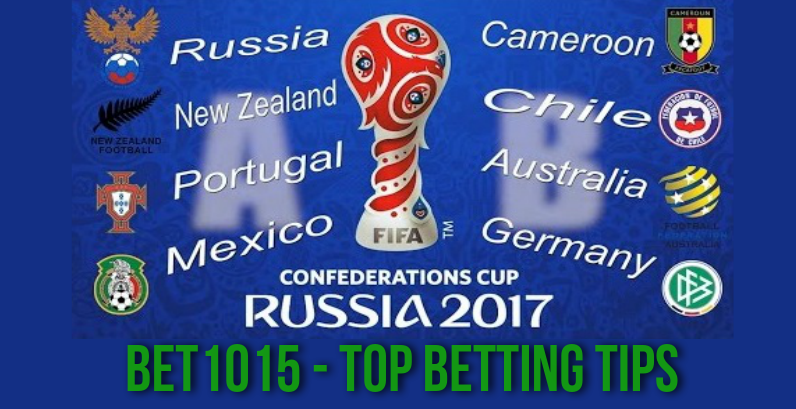 The 2017 FIFA Confederations Cup will be the 10th time the tournament has been contested. The competition will be played between the 17th June and 2nd July.  The quadrennial international football tournament is a pre-cursor to the World Cup the following year. It also gives the host country a chance to test their facilities and organisational skills. [toc]

The Confederations Cup also provides a great way for participating teams, including the hosts Russia, to continue their building process towards the 2018 World Cup finals.

Who qualifies for the Confederations Cup 2017?

Therefore, the tournament is made of teams who have been successful in various events over the past three years. This is in addition to Russia.

How do the Confederations Cup Teams Advance?

The eight teams have been split into two groups of four. Each team will be playing the other three teams in their group once.  The top two teams from each group advance to the semi-finals. The tournament is then played on a knockout format. There will be extra-time and penalties to decide the winner if matches are level after 90 minutes.

This will be the only set of competitive fixtures Russia will have before the 2018 World Cup finals.  Stanislav Cherchesov has the honour of managing his country in a home World Cup but initial results were not great.  Russia lost 4-3 to Costa Rica and 2-1 to Qatar towards the end of 2016. However they have recently defeated Hungary and picked up draws against Belgium and Chile.

The Russian team will probably be taking this tournament more seriously than any other team at the event. As a result they could make it out of the group stages.  Russia are 13/5 to win Group A and 4/7 to qualify.

Euro 2016 winners Portugal are considered the strongest team in this group and this is reflected in their odds of 10/11 to win Group A.  The Portuguese have named a strong squad, with Cristiano Ronaldo, Bernardo Silva and Andre Gomes all included.  With this talent, they should make the semi-finals.

The third team contesting the two qualifying spots is Mexico.  The Mexican management have also named a strong looking squad. However they have many fixtures to play in addition to this tournament. This includes a World Cup qualifier and their defence of the CONCACAF Gold Cup.  Mexico are 8/11 to qualify from Group A but with other things on their mind, Russia are the better bet.

Unfortunately for New Zealand, they are very unlikely to challenge for the top two places and are 1/4 to finish bottom of the group.  Even at 17/1 to qualify, they are not worth backing.

2014 World Cup winners Germany immediately stand out but Joachim Low has named a weakened squad for the tournament.  However, there are still some very good players in the squad, playing for the top clubs around Europe.  There is also plenty of exciting young talent in the squad, who are aiming to make a late push for a place in the 2018 World Cup squad.

Germany are Evens to win the group and have the talent to finish on top.

Chile are available at 8/5 to win Group B and with Arturo Vidal and Alexis Sanchez in their squad, can cause any team in the world problems.  They are likely to be the team challenging Germany for first place. Chile could easily qualify as group winners, making them a good bet.

Cameroon caused a shock by winning the 2017 Africa Cup of Nations. They come into the 2017 Confederations Cup as outsiders.  They have not played much football following their success in February but have two matches prior to this tournament.  It would be a surprise to see Cameroon progress from this group and that is reflected in their odds of 8/1.

Australia are the fourth team in the group and most likely to finish bottom.  They are finding 2018 World Cup qualification difficult. Both Germany and Chile are much stronger than anything the Aussies have faced in their qualifying campaign.  Australia are 5/6 to finish bottom of Group B.

Looking at the two groups, Portugal, Russia, Germany and Chile are the best bets for qualification. You can get 11/4 for all four teams to reach the semi-final stage of the 2017 Confederations Cup.

Much will depend on how the teams come together in the semi-final stage, as to who has the best chance to win the tournament.  If Germany and Portugal come together, it is going to be a tough match to call, if they don’t, then both teams could meet in the final.  Skybet offer 5/1 for a Germany vs Portugal final and in truth, it is between these two nations and Chile to win the tournament.

Despite having an inexperienced looking squad, Germany have tremendous young talent, who will be hungry to perform well for their country.  The extra desire of these players is what could make the difference when meeting the likes of Portugal or Chile and propel Germany to the trophy.

For those looking to back an outsider, you can do worse than look at the hosts, Russia.  The hosts have won the tournament on three previous occasions, including Brazil in 2013 and Russia will be taking this event very seriously in comparison to the other nations.  Russia are available at 9/1 to win the 2017 Confederations Cup.