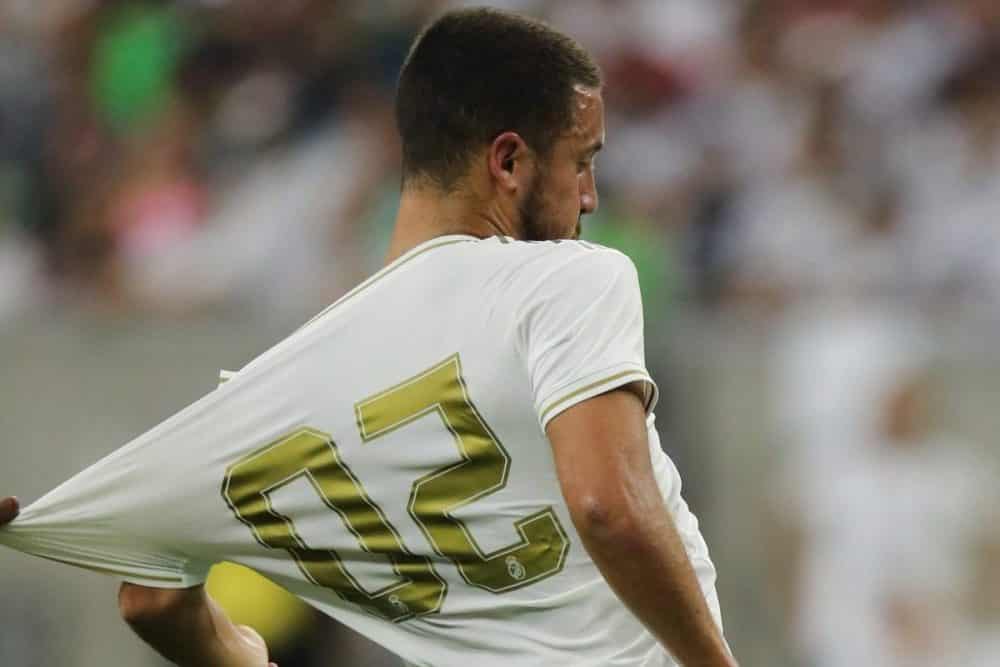 Ex-Chelsea star Eden Hazard made his debut for Real Madrid wearing the No.50 jersey in a pre-season tie against Bayern Munich at Houston. Hazard is still without an official squad number which is his much-preferred No.7 now worn by Mariano Diaz.

The Belgian international, it seems, has opted for the No. 50 in honour of the Apollo moon landing that took place exactly fifty years ago in 1969.

The £130 million star's debut didn't exactly get off to a start that he would have liked as Los Blancos lost 1-3 to Bayern Munich in a very entertaining International Champions Cup match tie held in the United States.

Madrid boss Zinedine Zidane started with an exciting 4-2-3-1 formation powered by Karim Benzema and Hazard upfront in the attack and likes of Isco, Marco Asensio, Toni Kroos and Luka Modric playing behind the two.

Hazard was involved in some heavy touches, but also rhymed smoothly with Benzema and Marcelo and essayed a wonderful pass from the left wing into the box in the 34th which unfortunately didn't get converted.

Despite Madrid's fluid play, it was Bayern who opened the scoring early. David Alaba pounced on a mis-pass from Kross to Modric, cut the ball back from the left to Corentin Tolisso whose first shot was cleared but the rebound was hammered into the top corner of the net making it 1-0 for the German club in the 15th minute.

Bayern effected as many as five changes at the start of the second half and Zidane went a step further with the entire 11. Defenders Lucas Hernandez and Benjamin Pavard for Bayern and Ferland Mendy and Rodrygo for Real were among the big-name signings making their debuts. But it was the club regulars who got the goals for the Bundesliga giants in the second half – Robert Lewandowski in the 67th minute and Serge Gnabry in the 69th.

Lewandowski held off his marker to turn midway and blaze a low shot home from 12 meters and two minutes later, Serge Gnabry took advantage of some sloppy defending to score from a similar spot.

Real Madrid's consolation came in the 84th minute when Rodrygo scored from a free kick.

There was some buzz among Real watchers as Zidane fielded an absolutely fresh new quartet in the form of Luka Jovic, Takefusa Kubo, Rodrygo Goes and Vinicius Jr. and a raw back-four of Adrian de la Fuente, Nacho, Javier Fernandez and Ferland Mendy.

The defensive four showed their inexperience when dealing with crosses into the box, the ensuing pandemonium resulting in the two second half Bayern goals.