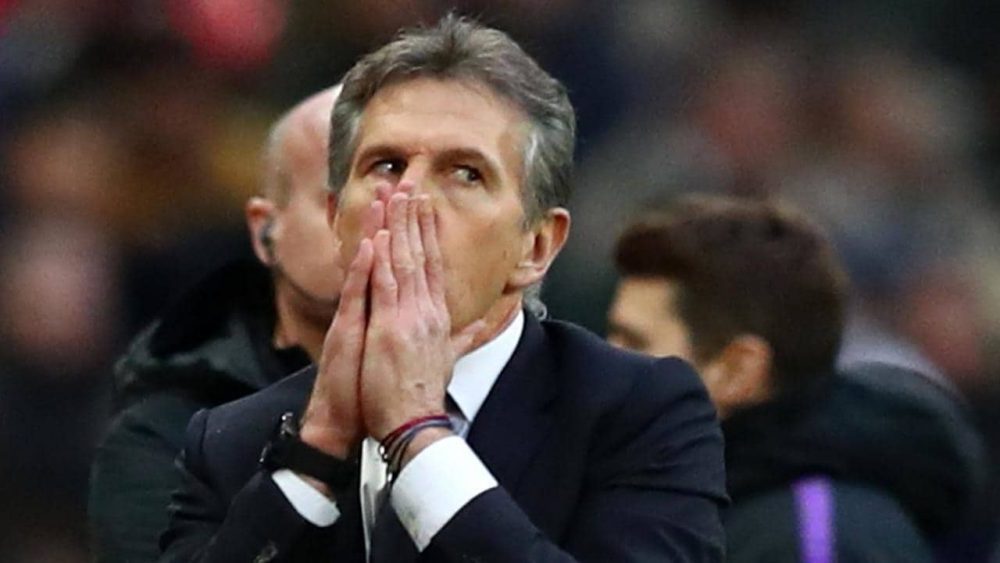 English Premier League Sack Race – see which Managers are making the list this February as the sacking season begins.

It was inevitable. The bookmaker odds were heavily stacked on Claude Puel's impending ouster at Leicester. It came in the early hours of February 25th following on the heels of an ignominious 1-4 home defeat to Crystal Palace. Having begun the year with a 0-1 win over Everton, the Foxes just stumbled from one defeat to another after that, succumbing in five of their six Premier league games following the January 1 Goodison Park victory.

The next and 2nd most hot managerial candidate for a boot is Everton boss Marco Silva at odds of 4/1. Everton's position just below the top half of the EPL table at the 11th spot may look deceptive given the fact that they have won just three of their last 14 games. The Toffees have crashed to three consecutive defeats in the last fortnight alone and the mid-week clash against a beleaguered Cardiff City could give Silva the breather he so desperately needs.

One of the hottest candidates for sacking is Maurizio Sarri at 10/1 and is the 3rd favorite for the axe. The Chelsea boss started the season in splendid fashion, remaining unbeaten in his initial twelve games since taking over reins at Stamford Bridge. A 1-3 defeat at the Wembley to Tottenham Hotspur set the tone for things to come.

The next 14 games saw the West London club succumb to losses in as many as six Premier league outings. The last three weeks have been particularly nightmarish for the Italian coach. A 0-2 loss to Arsenal followed by a particularly stunning 0-4 defeat to Bournemouth and a humiliating 0-6 drubbing at the hands of title holders Manchester City have put Sarri's job on the line at Stamford Bridge.

The Blues have a tough outing against Spurs on Wednesday and in light of club owner Roman Abramovich's low tolerance to “losers”, the game could be a watershed moment for Sarri.

Sean Dyche, who has been around with Burnley FC since 2012 is one more manager whom the bookmakers feel could get the boot. At odds of 12/1 and the 4th hottest candidate for a sacking, 47-year old Dyche could well leave Turf Moor on his own accord instead of being shown the door.

There are strong rumours that the Englishman may move in to replace the ousted Puel at the King Power stadium, Leicester City. Moreover, club fans have had little to complain about of late. After a terrible mid-season phase when they languished in relegation territory during December, the Clarets have fought back admirably in 2019 to reach a respectable 13th spot on the Premier League table.

With an unbeaten run of 8 games and a forthcoming outing with bottom half side Newcastle on the cards, things don't look that dismal for Dyche. The odds of 12/1 do look a little unjustified.

Best of the Rest

Rafael Benitez and Manuel Pellegrini are among the more prominent names who at 20/1 are the bookmakers' 7th and 8th ranked favorites to get booted from their respective clubs. Benitez's Newcastle are just two places away from relegation despite the club's most decent phase of the entire season. Beginning the season with 10 winless outings, the Magpies have gone through the last month with just a defeat, a draw and 3 wins from their last 5 fixtures. From the looks of it, the 58-year old Spaniard's place at the St. James Park looks secure for the moment.

Same can be said of ex-Bayern boss Manuel Pellegrini, who may not have done a great job with West Ham United but has managed to keep them in the Top half of the table.

Some of the other notable candidates whose heads could roll are: