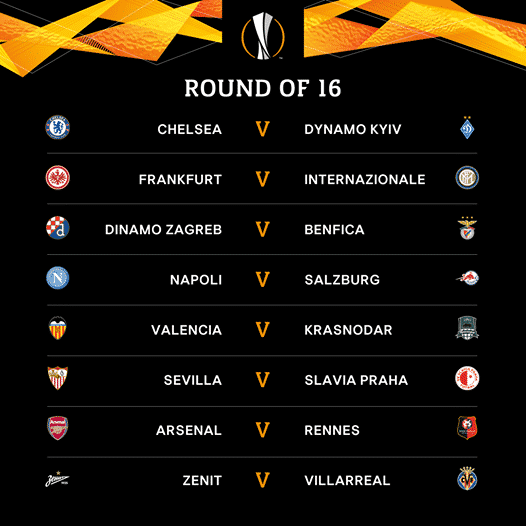 Europa League Round of 16 draw announced:

The Round of 16 draw for the 2020-21 Europa League took place at the House of European Football in Nyon, Switzerland on the evening of February 26th, Friday.

Two favourites to win tournament have been pitted against each other in the Round of 16. Premier league giants Manchester United will lock horns with Serie A side AC Milan in a battle where Zlatan Ibrahimovic will come up against his former club having won the title in 2017 in United colours.

The tireless 39-year-old Swede has been in top form, getting 14 goals from his 13 outings for the Milanese club and taking them to the brink of a possible Serie A title. No wonder the United-Milan clash will be the showpiece of the Round of 16.

The last of Manchester United and AC Milan's meetings came in the 2009/10 UEFA Champions League at a similar stage with the English side winning 3-2 away and 4-0 at home.

Tottenham will play Croatian side Dinamo Zagreb while Glasgow-based Rangers have been drawn against Czech side Slavia Prague, who knocked out Leicester City 0-2 on aggregate last week.

Another noteworthy tie of the round will see AS Roma ranged up against 2009 champions Shakhtar Donetsk of Ukraine. Roma will play the first leg at home on 11 March, while the second leg will be played on 18 March 2021 away in Ukraine. Roma have in their ranks Armenian attacker Henrikh Mkhitaryan who incidentally spent two seasons with Shakhtar way back in 2020-2013 getting as many as 38 goals from his 72 appearances there.

La Liga side Villarreal can expect a tough test of their prowess against another Ukrainaian side Dynamo Kyiv.

Ajax, who lost to United in the 2017 final, could have it easy against Swiss outfit Young Boys and two debutants at this stage of the Europa League will lock horns in the form of Granada and Molde.

The eight final-16 ties will be played on dates March 11th and March 18th.