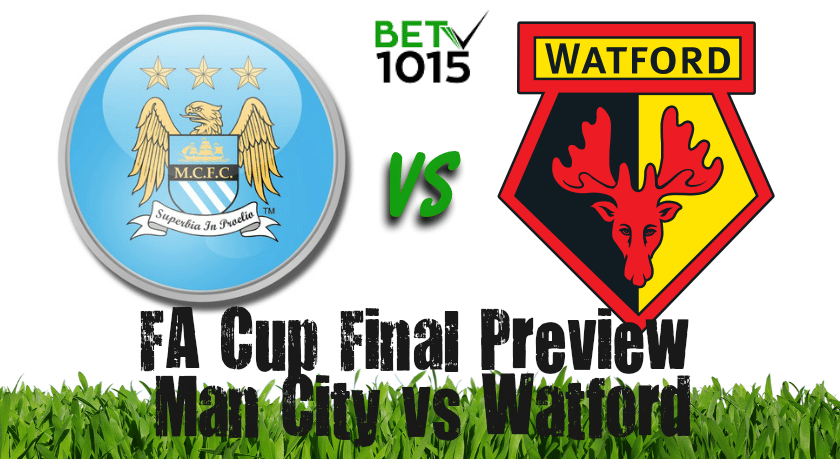 Premier League champions Manchester City will aim to grab their third silverware when they meet Javier Gracia’s Watford at Wembley for the 2019 Emirates FA Cup Final on Saturday. For Pep Guardiola’s City it could be their sixth trophy while the Hornets will be going for their maiden success in the competition.

The City side boasts incredible depth and attacking talent, which is why their passage to the FA Cup final was easy. The 7-0 thrashing League 1 side Rotherham followed by a 5-0 rout of Premier League side Burnley are some of the huge wins for the club in the knock-out rounds. But rivals seem to be finding ways to trouble City as evinced from their last two outings against Swansea and Brighton & Hove which the Citizens won on tight margins of 3-2 and 1-0 respectively. Which is why things could get interesting against a rejuvenated Watford side that showed great pluck in downing Newcastle 2-0 and a winning 3-2 in the semi-finals against the very difficult Wolves.

For Watford it will be a momentous occasion having made it to the finals of the Cup for the first time since 1984.

Manchester City with its attacking riches in the likes of Sergio Aguero, Raheem Sterling, Leroy Sane and Gabriel Jesus will be hard to stop, no doubt about that. The Hornets will have no option but to hit on the breaks (counter attack) and that is where the scoring skills of someone like Gerard Deulofeu will come in. The 25-year old Spaniard striker has scored 12 goals across all forms of competition this season and nine of the those have come from the last 12 outings.

Manchester City are overwhelming favourites to win May 18th's Wembley final at odds of 1/5 while Watford are rank outsiders at 6/1.