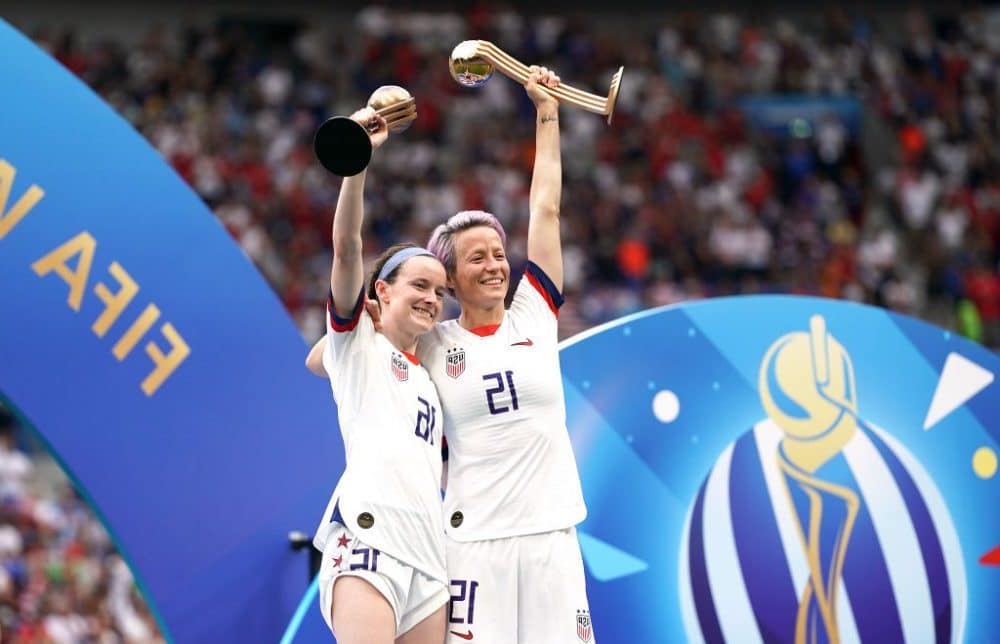 The United States recorded their fourth title in the Women's World Cup football when they got the better of Netherlands by a couple of goals at the Stade de Lyon on Sunday.

The Americans were distinctly the dominant side despite the Dutch women putting up a stiff goal-mouth resistance throughout the game.

The upshot was that the match went goal-less into the interval, something unusual for the champions who have scored a goal at least inside the first 15 minutes of a game prior to this one. But the resolute defence of the Dutch broke down when defender Stefanie van der Gragt's high boot caught USA striker Alex Morgan and after a video assistant referee (VAR) verification a penalty was awarded.

Megan Rapinoe, playing her final World Cup, slotted home the spot-kick in the 61st minute becoming the highest scorer in the 2019 France edition.

Rapinoe earned not just the Golden Boot with six goals and three assists but also the Player of the tournament.

More was to come in the game for the USA in the 69th minute as Rose Lavelle ran down the middle, dodged past defenders and slammed a solid left-footer past Dutch custodian Sari van Veenendaal.

The Oranje women’s strategy to absorb pressure from the Americans in the first half and counter attack with pace paid limited dividends as was evidenced from just one shot on target in the 90 minutes of play.

The US by contrast had 10 shots on target and had it not been for van Veenendaal's heroics against a couple of stinging strikes by Alex Morgan, the margin of defeat for the Dutch could have been even more.

Van Veenendaal made eight saves in the match in all – the most by a goalkeeper in a knockout stage match of the tournament. 36-year old Carli Lloyd, scorer of a hat-trick for the USA in the 2015 finals, made a brief and probably her final appearance in a World Cup game when she came in as a substitute for Tobin Heath in the 87th minute.

United States boss Jill Ellis's team have been grabbing headlines for being arrogant winners and even branded disrespectful when striker Morgan celebrated her semi-final goal against England by pretending to sip a cup of tea, but their cockiness seemed to have been justified as they romped ahead with their fourth win after 1991, 1995, 2015 titles.

For European champions Netherlands, this was only their second appearance in a World Cup and their first in a final.

The USA scored 26 goals at the 2019 Women's World Cup, the most by a team at a single tournament in the competition's history. Sunday's win at Lyon was the 12th consecutive victory at the Women's World Cup for the USA – the longest winning run in World Cup history be it for men or women.