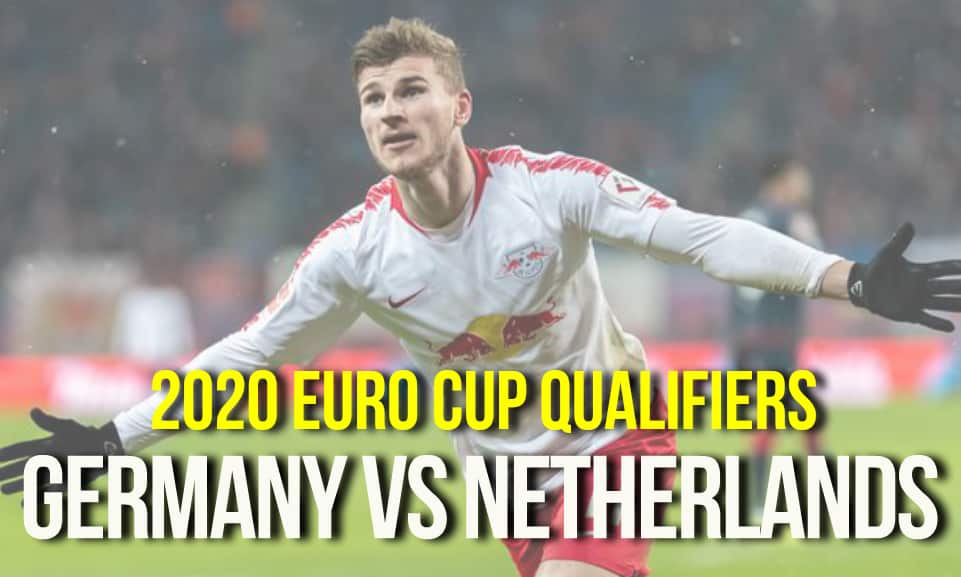 This is surely the pick of all 2020 Euro qualifier matches taking place this weekend. Fierce rivals Germany and the Netherlands play out this Group C fixture as a resurgent Dutch outfit aim to qualify for their first major tournament since the 2014 World Cup.

Germany have won all their Group games garnering nine points along the way. The Netherlands have played 2 so far, winning one and losing one (2-3 to Germany in a Group C home fixture). So, this clash could turn out to be crucial to the Dutch in the light of the fact that Northern Ireland have already notched up 12 points from their 4 games and are clearly leading the cluster.

The comforting factor for the Dutch is that they have played only 2 games and have ample matches in hand to make up.

For Germany, the likes of Jerome Boeteng, Mats Hummels, Toni Kroos and Manuel Neuer all of whom have completed 50 international caps could be overlooked as Joachim Lowe goes for fresh blood.

Neuer may well have to warm the bench as Barcelona's Marc-Andre Ter Stegen increasingly looks the best option between the posts. But they'll be without Leroy Sane after the Manchester City winger suffered a serious injury in the charity shield.

Sane scored in each of Germany's last two games against the Netherlands and will be sorely missed.

RB Leipzig striker Timo Werner is in brilliant form after his hat-trick over Borussia Monchengladbach last weekend taking his tally of goals in the last three games to five. He also netted in Germany's 2-2 draw with the Netherlands in the UEFA Nations League last November.

The odds of Werner to score at any time on Friday is 1/1.

Some of the other prominent names to make the cut for the starting XI at Hamburg could be Marco Reus, Nico Schulz, Serge Gnabry, Leon Goretzka and Ilkay Gundogan.

The Netherlands have in their ranks two of the most expensive defenders in the history of football in Virgil van Dijk and Juventus's Mathijs De Ligt.

Champions League winner Van Dijk has looked his usual self so far this season with Liverpool, but De Ligt endured a horror debut for Juventus, conceding three goals and looking very vulnerable against Napoli, although fortunately for him his new club ended 4-3 winners at Turin on Saturday.

But, both van Dijk and De Ligt have their names on the scoresheet with Germany in recent encounters.

Justin Kluivert is a late inclusion into the Dutch squad but expect Ronald Koeman to go with a similar squad that narrowly lost to Germany last time with Memphis Depay up front, flanked by Quincy Promes and Ryan Babel and the incredible Frenkie De Jong marshalling the midfield.

The Germans especially have been in a punishing mood in the qualifiers. While the only two goals they conceded were in the 2-3 win over Netherlands at the Johan Cruijff ArenA, Amsterdam, the Germans have banged in as many as 13 from their 3 outings.

The Netherlands have only played two qualifiers so far, that include 4-0 win over Belarus and the home defeat to Germany, after their summer fixtures were occupied by the UEFA Nations League final four in which they beat England in the semi-final only to lose to Portugal in the final.

Odds for both teams to score

With the visiting Dutch fighting to survive, a draw with results of 1-1 or 2-2 are very likely.