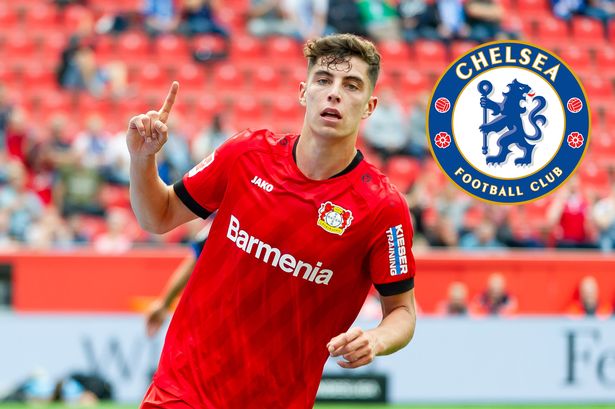 Chelsea are homing in on Bayer Leverkusen star Kai Havertz as talks between the two clubs are beginning to gather steam.

The only hurdle in the way of a potential deal seems to be Leverkusen's asking price.

The Bundesliga outfit has pegged a price of £90 million for the 21-year old midfielder while the management at Stamford Bridge want to settle for at least £20 million less.

Havertz who has scored 37 goals for his club over the last two seasons is pushing hard for a move to the North London club and has spoken to his international team-mates Timo Werner and Toni Rudiger on the subject.

In fact, such is the urgency on Havertz's part that the young German star wants Leverkusen to agree to a deal with Chelsea before the Bundesliga side's Europa League match against Rangers next week.

Havertz's current deal at the Bay Arena expires in June 2022.

Chelsea confirming their place in the Champions League with a move into the Top four have only strengthened their case to sign the German even further.

Meanwhile, compatriot Timo Werner has completed his first training session at Chelsea after his £47m transfer from RB Leipzig.

The move for the 24-year old German international was officially agreed before the 2019/20 Bundesliga season concluded last month and his contract at Stamford Bridge came into effect from July 1, 2020.

Werner landed in London and was seen in attendance at Stamford Bridge to watch his new teammates secure a Champions League berth for next season with a 2-0 win over Wolves last weekend.

Rumors emanating from Stamford Bridge suggest that Frank Lampard is looking for a new goalkeeper to replace Kepa Arrizabalaga.

Kepa has had the worst season by any Chelsea goalkeeper, conceding more number of goals than any other custodian in Premier League's top ten.

In fact Lampard went on to the extent of keeping out the Spaniard in Sunday's do-or-die fixture against the Wolves, such has been the loss of confidence in the keeper.

In fact Chelsea's transfer chief Marina Granovskaia was reportedly in talks with Atletico for Slovenian international Oblak, considered to be among the best goalkeepers in the world.

But a release clause for Oblak amounting to a ridiculous £109m could put the spanner in the works.

Another factor that could possibly weaken Chelsea's quest for the Slovenian is their renewed interest in Dean Henderson, Manchester United's on-loan goalkeeper to Sheffield.

According to reports Lampard is ready to fork out £55m for the Sheffield loanee, who is seeking assurances on his future at Old Trafford from Ole Gunnar Solskjaer.