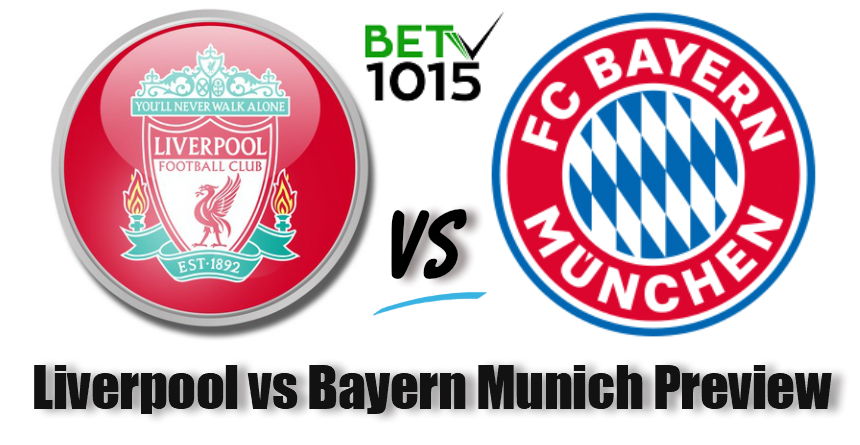 * The Liverpool vs Bayern Munich odds are taken from online bookmaker Betfred and were correct as of 19/02/2019 – subject to change.

Fans will be looking forward to the clash of two giant footballing names at Anfield on Tuesday, February 19th night, when Liverpool and Bayern Munich face each other in a UEFA Champions League (UCL) “Round of 16” fixture.

Jurgen Klopp's Reds sealed a place in the Round of 16 berth in dramatic fashion prevailing over a formidable Napoli 1-0 on the back of a Mohammed Salah goal and an out-of-the-world save from keeper Alisson.

For Klopp, serious back-line problems persist with 3 key defensive men out of action – Dejan Lovren and Joe Gomez with long-term hamstring and calf injuries and even worse, Virgil van Dijk, serving a one-game suspension in the first leg at Anfield. That leaves only Joel Matip as a major defensive figure with the likes of Alexander-Arnold, Fabinho and Robertson giving him company at the back. Forward Xherdan Shaqiri will probably remain in the side-lines but could be introduced later in the game depending on which way the proceedings go.

The attack trio of Salah, Firmino and Sadio Mane look to be in good shape and hold the key to the Reds' performance. They will have James Milner, Naby Keita and Georginio Wijnaldum playing behind them.

As for Bayern Munich, captain Manuel Neuer is expected to be fit after missing Bundesliga games against Bayer Leverkusen and Schalke with an injured thumb.

Other important omissions from the Bavarian club will be Thomas Muller, still under a red-card ban after a challenge on Nicolas Tagliafico in a Group game against Ajax and Corentin Tolisso out since September.

The incredible Arjen Robben won't be around having hung up his boots in November. The already depleted Bayern attack survived another scare when Kingsley Coman was medically cleared of an ankle injury and looks ready to start off at Anfield on February 19th.

The dangerous Robert Lewandowski, the top Bundesliga scorer in the 2018-19 so far, will be around and will be the primary threat to the Liverpool goal what with the hosts' defence playing much below full-strength.

Head coach Niko Kovac would probably go in for a 4-3-3 formation of play with the following starting XI:

For the Bundesliga champions and 28-time title-holders, it’s not been the happiest of seasons. Going down to as low as the 6th spot on the Bundesliga table in early October, Niko Kovac’s side, though, have recovered admirably since then to claw their way back to the second spot and just 5 points behind League leaders Borussia Dortmund.

Although the visitors let in just five goals from their UCL group games, they are not likely to go back with a clean sheet given Liverpool's hunger for goals.

There could be goals galore with bookmakers’ odds pointing towards a 2-2 draw.