Home Football betting Revealed – the longest away unbeaten records for every team in the Premier League
1. 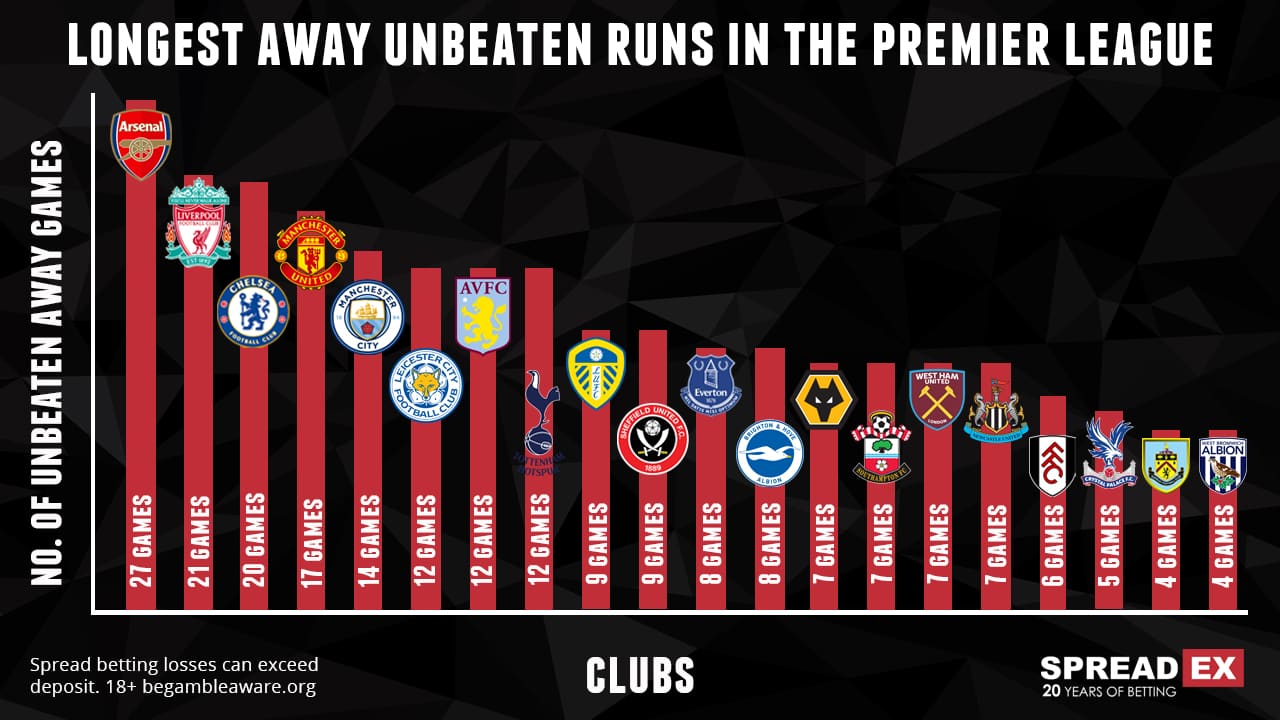 While Liverpool were drawing focus for their unbeaten run at home, Man United have gradually built up a record-equalling personal best on the road, going 17 games without a Premier League loss away from Old Trafford.

If they draw or win against Arsenal at the Emirates this Saturday, they will surpass a PB that has stood since the end of the last millennium, taking their total to 18 games.

But how does that compared to the rest of the Premier League? Even if they do avoid defeat at the Emirates, they would still need to extend that run for a few more fixtures before they can claim a podium finish.

So, what are the longest unbeaten runs away from home for every team in the Premier League? Take a look below!

The run started with a 1-1 draw at Villa Park, and came to an end with a 2-0 loss at Old Trafford, a defeat that brought to a close the entire Invincibles enterprise.

Not only did Liverpool’s 2-1 loss to Man City on January 3rd 2019 essentially cost them the league, it prevented the Reds from racking up a record-breaking unbeaten run away from home. If they hadn’t tripped up at the Etihad, they would be atop this list with a 32-game streak.

Instead, they have to settle for 2nd, going 21 games without tasting defeat on the road. Bookended by 1-0 wins at Brighton and Norwich, it came crashing to a halt with that shock 3-0 slump at Watford on 29th February 2020.

The Blues’ best-ever away run lasted just over a year – but didn’t come during one of their title wins. They went unbeaten away from Stamford Bridge for 20 games from 23rd December 2007 to 28th December 2008, before losing 3-0 at Old Trafford on 11th January 2009.

Prior to that, Chelsea had managed a 19-game unbeaten streak between 30th October 2004 and 23rd October 2005, only for that run to also be ended at Old Trafford.

Man United will take their unbeaten run on the road to 18 games with a result at Arsenal.

As it stands, however, this current streak is equal to the one managed between 5th December 1998 and 11th September 1999, a run that was brutally ended by a 5-0 defeat at Stamford Bridge.

Twice have Manchester City managed to go unbeaten for 14 games away from home in the Premier League.

The first came between 15th April and 31st December 2017, halted by a 4-3 loss at Anfield. Just over a month later they began another streak, this time running from 3rd February to 4th December 2018, and ending with a 2-0 defeat a Stamford Bridge.

The first of 3 teams with a personal best of 12 games, Leicester actually have the same record as Aston Villa in 7th – 8 wins, 4 draws and a goal difference of +13.

What places their run – which takes in the first half of their legendary 2015/16 title-winning season – above Villa is the fact they scored 25 goals to the Midlands club’s 21.

The highest ranked team never to win a Premier League title, Aston Villa’s record streak away from home was over 2 decades ago, from 8th March to 28th November 1998.

It began with a 1-0 victory at Stamford Bridge, and ended, fittingly, with a return to West London, Villa losing 2-1 to Chelsea on 9th December.

Despite also sitting on 12 games, Spurs are ranked behind Leicester and Aston Villa as they managed an inferior 7 wins and 5 draws during their club best streak.

Taking place during 2015/16, the run began with a 1-1 draw at eventual champs Leicester and closed with a 2-1 victory over City, before they suffered  a 1-0 loss at West Ham a fortnight later.

Cracking the top 10 with a 9-game unbeaten streak away from Elland Road are Leeds. It was a very strong run back in 2001, with 8 wins and 1 draw, before a 2-1 loss a Highbury.

One of the more recent records on this list, Sheffield United’s remarkable return to the top flight in 2019/20 opened with a 9-game unbeaten run away from Bramall Lane. Chris Wilder’s road warriors rank behind Leeds, however, as they picked up 6 wins and 3 draws.

What puts Everton above Brighton is the fact they’ve achieved an 8-game unbeaten streak away from Goodison Park not once, but twice. At the time of writing they are 5 away games without a loss in the league, so a new record could be incoming.

Between the end of 2019/20 and the start of 2020/21, the Seagulls managed to go 8 games unbeaten away from home. What makes that all the more surprising is that their all-time record at Falmer Stadium without defeat is only 6 games!

In another over-achieving season for Wolves, 2019/20 not only saw the club finish in 7th once again, but pick up a 7-game unbeaten streak away from Molineux, including a 2-0 win over then-defending champions Man City.

After Man United, this is the freshest record in the league, coming to a close with a 2-0 loss at Leicester on 16th January 2021. On the same 4 draws and 3 wins as Wolves, an inferior goal difference of +3 leaves them behind Nuno Espirito Santos and co.

The final team to go 7 games unbeaten away from home, Newcastle did it in the dullest way possible, producing 7 consecutive draws on the road.

From the joint-worst unbeaten run at home to the 3rd worst unbeaten streak on the road, Crystal Palace have only ever manged to go 5 games without a loss away from Selhurst Park. They did achieve that feat on 3 separate occasions, however.

The Clarets only avoid the bottom spot become they have strung together a measly 4-game run away from home 4 times between 2017 and 2020.

Like Burnley, the Baggies have only ever managed 4 consecutive games without a loss away from the Hawthorns. They sit in last place due to the fact they’ve only done that thrice, once less than the Clarets.

For comparison, below are the unbeaten home records for every team in the Premier League:

Unbeaten Home records for every team in the Premier League