* The Manchester City vs Arsenal odds are taken from online bookmaker Betsid and were correct as of 02/02/2019 – subject to change. 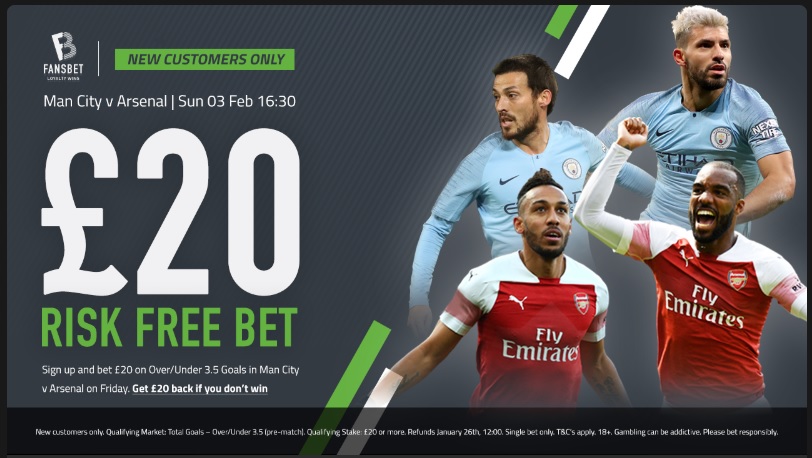 Manchester City vs Arsenal Where To Watch

After a flawless performance till November, Pep Guardiola's Manchester City have floundered big time since the start of December, losing as many as 4 Premier League outings since then, the latest being a 1-2 humiliation away at St.James Park to Newcastle on Wednesday night.

City will obviously aim to get things right when they host Arsenal at the Etihad on Sunday for a critical EPL clash.

City have been dominating proceedings in most of their games but have at times been failing to convert them into goals.

One worry for Guardiola will be Ederson who sustained a bad cut during the Newcastle loss. In case the Brazilian were not to make it to the starting XI, then 20-year-old Aro Muric could be coming in as replacement between the posts on Sunday.

Benjamin Mendy is reported to be recovering from a knee injury but doesn't look likely to start against the Gunners.

Vincent Kompany whose future at the Etihad looks to be under a cloud is ruled out too, while 2nd choice goalkeeper Claudio Bravo is out for some time at least with an Achilles injury.

Arsenal have broken into the Top Four for the first time since early November when they earned a hard-fought victory over a Cardiff City team still fighting the emotional aftermath of the disappearance of new-signing Emiliano Sala.

The Gunners rode on goals from Aubameyang and Lacazette to complete a win in a match where most players failed to impress.

Especially lackluster was Mesut Ozil, whom Emery was compelled to replace with Aaron Ramsey in the 76th minute.

The Gunners go into the critical weekend Etihad clash with serious back-line problems. Hector Bellerin and Rob Holding with injuries to anterior cruciate ligaments and Sokratis Papastathopolous (ankle) are ruled out for the February 3rd outing.

Laurent Koscielny is back in full training after sustaining a jaw injury against Manchester United while Ainsley Maitland-Niles and Henrikh Mkhitaryan are being assessed for knee and metatarsal problems and it's touch-and-go for them.

Danny Welbeck with a long-term ankle injury is obviously ruled out. It would be surprise if Emery were not to drop Ozil from the weekend game and choose Alex Iwobi to start.

Bernd Leno (goal), Stephan Lichtsteiner, Shkodran Mustafi, Laurent Koscielny, SeadKolasinac, Lucas Torreira, Granit Xhaka, Alex Iwobi, Aaron Ramsey, Pierre Aubameyang, Alexandre Lacazette
City will be expected to come all out guns blazing at Arsenal in trying to make up for the mid-week blemish against the Magpies and with an attack like theirs, they are likely to trouble a injury-hit Arsenal defense no end.

But don't rule out the likes of Aubameyang or Lacazette scoring on the counter.

Odds are overwhelmingly in favor of the hosts to take three points which they badly need if they are to close the 5-point gap with table-toppers Liverpool. For Unai Emery's men a defeat would mean dropping out of the Top Four space once again.