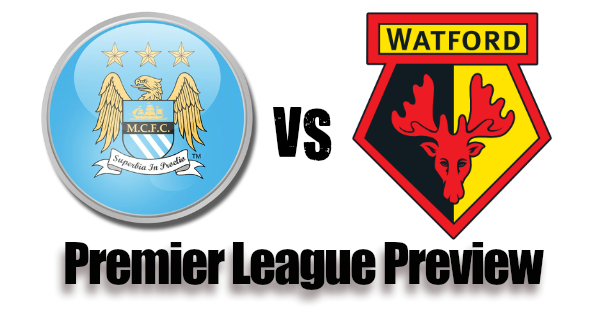 Check out the welcome bookie bonus on offer from our list of New betting sites below.

Pep Guardiola's men with a hard-fought weekend victory over Bournemouth leapt to 71 points and top of the Premier League (EPL) table with just 9 games to go for the season to end.

City now host Watford at the Etihad stadium in a weekend EPL clash that could see them maintain their stranglehold at the top slot of the table.

Javi Gracia's Hornets have had a comparatively satisfactory spell starting February in which their only defeat from 5 outings was a 0-5 thrashing at the hands of Liverpool about a fortnight ago.

The Hornets have recovered from the effects of the mauling to beat a gifted Leicester City side 2-1 last weekend.

Garcia's side will be back to full strength with full-back Kiko Femenia recovering from his illness and making the trip to Etihad. Another defender, Jose Holebas, who was back from his injuries during the Leicester game will start against City given his ability to attack down the left flank.

Troy Deeney, a scorer in the win over Leicester, will be influential as usual upfront with the likes of Gerard Deulofeu and Roberto Pereyra to keep him company in the space.

Watford's starting line-up playing in a 4-4-2 formation could look like this:

Kevin de Bruyne and John Stones of Man City were on the casualty list of the club as both of them were seen limping out mid-way through the Bournemouth game.

Aymeric Laporte and Fernandinho are already out for at least a month. Fabian Delph has recovered but may have to hit the bench given Oleksandr Zinchenko's good recent form.

De Bruyne and Stones may be rested for Saturday's clash keeping in mind the UEFA Champions League Round of 16 second-leg clash against Schalke 04 next week.

David Silva will probably may take on the mantle of playmaker in De Bruyne's absence.

Sergio Aguero and Raheem Sterling with 39 goals between them from all forms of competition will pose a serious threat to the Watford defense that will have the five goals they let in against Liverpool fresh on their minds.

Pep Guardiola's men have lost just one of their last 17 games, winning all the remaining ones. In this sort of form, it's difficult to see them finish the Etihad game without three points in the bag.

Manchester City's likely XI in a 4-3-3 formation will be: