Premier League: Manchester United vs Watford Preview and Predictions for 30/03/2019 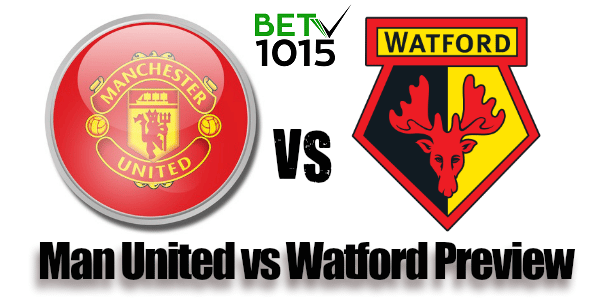 We have a full Manchester United vs Watford match preview, odds and correct score predictions for the game on Saturday.

Half Time/Full Time prediction: Manchester Utd at 11/10 with Bet365

After a fortnight of international breaks Premier League sides go at each other again with special focus on Saturday's fixture between Manchester United and Watford and Sunday's Liverpool-Tottenham clash at Anfield.

They have a not-so-impressive history against teams of the Top six with whom they have lost in all their fixtures this season.

Unlike their weekend rivals, Watford hardly have any fitness issues except for left back Jose Holebas. He is out with a long-term injury and not expected to return anytime soon. Robert Pereyra who shone in Argentina's recent win over Morocco in an international friendly will play a pivotal role in the Watford attack as usual alongside folks like Troy Deeney and Gerard Deulofeu.

Watford will probably go in with the same starting line-up that featured in the FA Cup quarter-final win over Crystal Palace. Someone like striker Andre Gray could come in during the latter stages of the game. As he did with great effect in the Palace win, getting the winning goal.

The Red Devils are facing a slew of injuries. Romelu Lukaku, Marcus Rashford and Anthony Martial all pulling out of their international fixtures for their respective countries Belgium, England and France. With Jesse Lingard also struggling for fitness, ​Ole Gunnar Solskjaer is facing a potential injury crisis in the attack department ahead of the Sunday's Old Trafford clash. In such a event Solskjaer may have to draw on the likes of academy graduates Mason Greenwood and Tahith Chong

Defender Luke Shaw was absent in England's international fixtures. This could mean more time on the field for Diogo Dalot.

United's 2-0 defeat to Arsenal before the international break saw the Gunners catapult into the Top Four. Thus putting Solskjaer under pressure to remain on course for Champions League qualification. The Red Devils are in the 5th spot with 58 points. They are a couple behind Arsenal's 60. Arsenal's next fixture at home against bottom-half side Newcastle. This may mean that the gap may persist for the time-being.

As for the Saturday's clash, United are definitely the bookmaker's favorites. This despite all their injury problems. Watford has a utterly dismal record against their March 30th rivals.

Except for a 3-1 win during the calamitous tenure of Jose Mourinho, the Hornets have succumbed to defeats in all their remaining previous 16 outings to United spanning over a couple of decades.

Score lines of 2-1 or 3-1 in favor of the hosts look distinct possibilities.