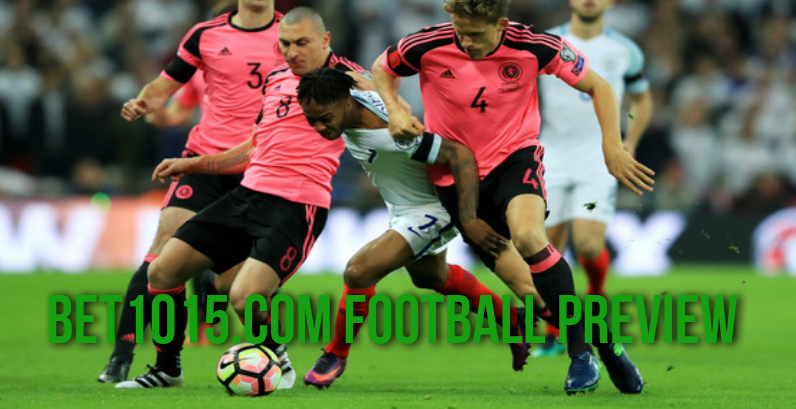 As leaders of their cluster, England will look to strengthen their position in Group F of the 2018 WC Qualifiers. The Three Lions visit Hampden Park, Glasgow, for their return clash against Scotland on Saturday.

Scotland's trip to  Wembley earlier in March had ended in a 0-3 defeat. With just 2 wins and 2 losses from their 5 Group outings, the Scots need desperately to move up from the 4th place. The Scots run-in, into a powerful England will make matters just that more difficult for them. To add to their consternation, Slovakia and Slovenia who occupy the 2 slots above them in the Group Table with 9 and 8 points have comparatively much easier outings against bottom-placed Lithuania and Malta.

As for the English, Wayne Rooney's omission comes as no surprise given his horrific 2016-17 season for Manchester United. Chelsea's Gary Cahill looks poised to take over the captain's mantle and also responsibilities at the back.

To give Cahill company in the defence at Glasgow could be folks like Kieran Trippier & Kyle Walker (Tottenham) and John Stones (Man City). Joe Hart's impressive show in England's 0-3 win over Lithuania in October last should make him the No. 1 choice for the goalkeeper's post.

Manager Gareth Southgate has crowded the mid-field space with sufficient talent. However it looks likely that some from the following could make the cut into the starting XI for the Hampden Park clash. Dele Alli & Eric Dier (Tottenham), Adam Lallana (Liverpool), Jesse Lingard (Man United), Raheem Sterling (Man City) and Alex Oxlade-Chamberlain (Arsenal). Tottenham's Harry Kane looks an automatic choice for the striker's position. This given Kane's explosive goal-scoring form in the latter half of the 2016-17 season. Jamie Vardy of Leicester City looks the other player who could assist the Tottenham talisman upfront.

Scotland manager Gordon Strachan, on the other hand, has some injury issues to deal with. Sheffield Wednesday striker Steven Fletcher will not feature in the Glasgow clash. This is owing to an injury sustained in a semi-final clash of the Scottish Cup.

Joining the list of the injured are folks like midfielders Kenny McLean of Aberdeen, Hibernian's John McGinn and Jamie Murphy of Brighton & Hove Albion. Steven Naismith (Norwich City) and Leigh Griffiths (Celtic) will probably fill in the striker's space.

Craig Gordon, who was brilliant between the posts in Scotland's victorious clash with Slovenia looks the automatic choice for the goalkeeper's position.

The Scotland vs England Hampden clash could provide some amount of entertainment and intensity. This considering that the home team will be desperately seeking the 2 points needed to keep their hopes for Moscow 2018 alive. Few are giving the Scots any chance in the June 10 clash. The UK betting sites odds for England to emerge victors with a probable score line of 2-0 looks strong.