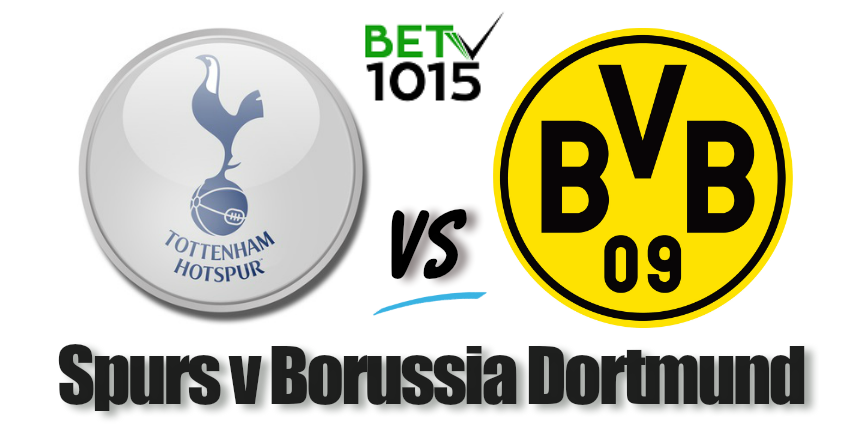 * The Tottenham Hotspur vs Borussia Dortmund odds are taken from online bookmaker Betfred and were correct as of 13/02/2019 – subject to change.

Tottenham Hotspur vs Borussia Dortmund Where To Watch

TV Channel:​ BT Sport 2
Online Steam: BT Sport app
When Is Kick Off?: Wednesday 13th February
​What Time Is Kick Off?: 20:00 GMT
​Where Is It Played?: The Wembley

Despite losing top players like Harry Kane and Del Alli through injuries, Tottenham have performed admirably of late, winning four consecutive Premier League outings including an emphatic one against Leicester City last Sunday. The entire onus of goal-scoring has thus shifted to Heung Min Son and Christian Eriksen in the absence of Kane and Alli. Although Dortmund won't have to deal with the two when they visit the Wembley for Wednesday's UEFA Champions League (UCL) clash, Son could create enough problems for their defense given his recent form.

The Korean striker has been electrifying, scoring 3 goals from his last 3 games.

Despite their phenomenal winning streak in the Bundesliga, the German league leaders have been prone to conceding goals, maintaining just two clean sheets from their last 11 Bundesliga games. In fact, Lucien Favre's club were rattled at the Signal Iduna Park (considered a fortress for Borussia) on Saturday when an un-fancied Hoffenheim banged in 3 goals in an 8-minute spell to draw level after being 0-3 down.

The German visitors to Wembley, who are likely to dominate possession, could however come under pressure in set-pieces where players like Eriksen excel.

For Mauricio Pochettino, his injury problems do not end with Kane and Alli. Left back Ben Davies and midfielder Eric Dier also look doubtful for February 13th's Wembley game, leaving Tottenham's starting line-up to look like this in a 5-4-1 formation:

As for Dortmund, all eyes will be on Jadon Sancho, the 18-year old Englishman who has already got 8 goals from his 18 appearances for the club so far.

Raphael Guerreiro could be another who could torment the Spurs defense. The 25-year has become something of a UCL specialist, getting four goals from his 4 European outings this season.

Paco Alcecer will of course be the major threat to the Spurs goal. With 13 goals already from his 18 outings, the 25-year old Spaniard is by far Dortmund's top scorer this season.

As for injuries, Dortmund will have to do without center backs Manuel Akanji and Leonardo Balerdi. But the major absence for the German side will be the influential Marco Reus, out due to an injury. Right back Lukasz Piszczek seems to have recovered from a heel issue and is most likely to make an appearance on Wednesday.

Dortmund have banged in as many as 54 goals which is equal to what their mid-week rivals have scored in the English Premier League, the only difference being that the Germans have taken five matches less to achieve the figure.

The two drawn games against Eintracht Frankfurt and 1899 Hoffenheim and an elimination from the DFB-Pokal Cup within a week before their English trip marks their worst phase in an otherwise phenomenal season. Nevertheless, Der BVB are ahead of the nearest arch-rivals Bayern Munich by 5 points on the Bundesliga table.

The only way Spurs could prevail over their German visitors is by getting goals, for it seems quite unlikely that the London club could keep the likes of Alcacer, Sancho, Mario Goetze, Axel Witsel and Guerreiro at bay.

Spurs have faced Dortmund just thrice till date and all of the encounters have taken place in recent years, i.e since 2015-16. The English club have won two and Dortmund in one.

For this one, the odds are slightly in favor of the hosts. The second leg will be played on March 5th and there's little saying that getting past the Round of 16 for the Spurs could get very tough if they don't win at Wembley on the night of February 13th.

A high-scoring affair with a score line reading 2-2 could be on the cards.