Coutinho stays at Liverpool; Emre Can’s future at Anfield under a cloud 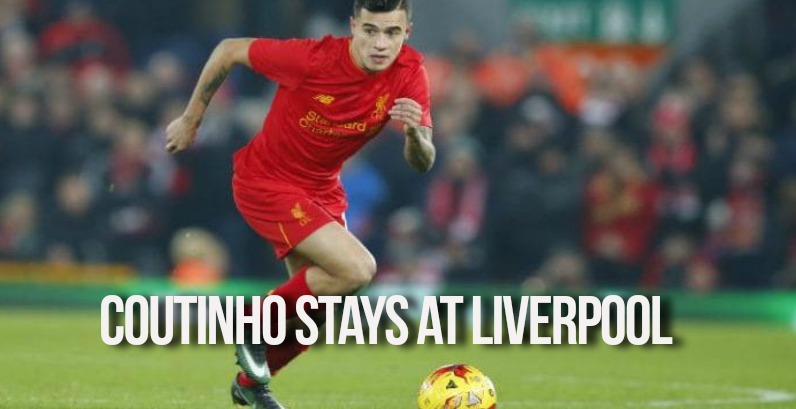 Despite the new contract bringing Philippe Coutinho £150,000-a-week, it was earlier rumored that the ace Brazilian striker could be on his way out of Anfield in 2017.

Both Barcelona and Paris St Germain had evinced interest in the 25-year old forward. However Jurgen Klopp is in no mood to part with his valued No.10. There are also claims that Coutinho has no desire to leave Anfield.

Sheyi Ojo, the 20-year old English U-20 international is another one who is under focus at the Merseyside club. Not though for positive reasons. Klopp is not interested in the youngster despite his success with the England U-20 side. He may loan out the young winger. Similar fates await two other 20-year old English wingers, Ryan Kent and Harry Wilson.

Newcastle United and Middlesbrough look like two possible destinations for the youngsters. This is especially true for Ojo, given his need to feature in senior-level football.

Emre Can Future In Doubt

Another Liverpool star facing contract uncertainty is Emre Can. The 23-year old German midfielder who hasn't yet returned for pre-season sessions from his successful outing for his country at the Confederations Cup has just a year left of his contract at Anfield. Team-mates Coutinho, Adam Lallana, Dejan Lovren and Joe Gomez have meanwhile already signed fresh contracts with the club.

As for Can, there are rumors circulating of Juventas showing interest in the attacking German. But the Italian giant's interest in him could have waned in favor of Paris St Germain central midfielder Blaise Matuidi. Both are believed to be going for £26.5 million. However it's Emre Can's age (seven years junior to Mutuidi) that has piqued the Old Lady's interest.

Alberto Moreno and a Sevilla Return

Alberto Moreno is another high-profile name at the Merseyside on his way out. Third placed Serie A side Napoli saw their £11 million bid for the Spanish left back rejected. While other Italian clubs like Inter Milan and AC Milan have evinced interest. Moreno expressed some desire in returning to his former club, Sevillla. However those hopes faded with the La Liga side roping in Aston Villa’s Jordan Amavi for the left-back space. Good news could be on the way for Moreno on the back of breaking news of Amavi having failed his medical test at Sevilla.

Meanwhile, Liverpool's interest in Alex Oxlade-Chamberlain and Virgil van Dijk got a jolt with both players staying put at their respective clubs, Arsenal and Southampton. Meanwhile, Real Madrid star, Jamie Rodriguez's name has been touted around the European club circuit with Liverpool being one of the 8 clubs to show interest in the Colombian. But the price tag of £66 million on the mercurial midfielder has only managed to put Jurgen Klopp off.