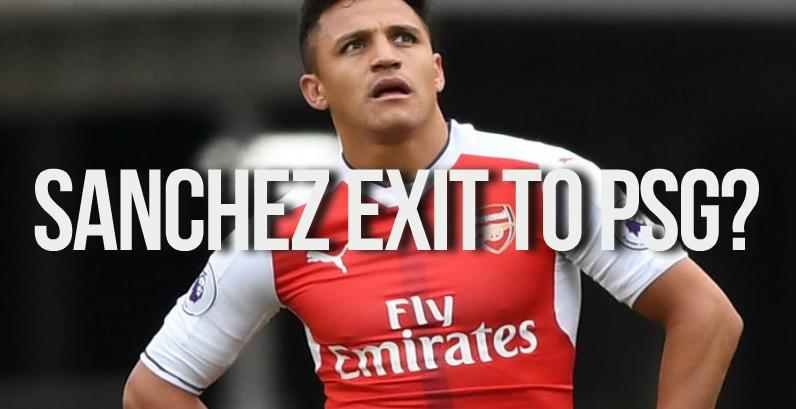 A tug of war seems to be on between Arsenal and other clubs for Gunners hit man Alexis Sanchez. While the Chilean striker was clear in his intent of not staying on at the Emirates after the 2016-17 season, Arsene Wenger has gone ahead and blocked any such move. The Arsenal boss doesn't want his talismanic striker to join any rival Premier League club. Especially Manchester City where Pep Guardiola has been seen making desperate efforts to acquire the Chilean.

Wenger may thus have to end up selling Sanchez to Paris St Germain. Sanchez seems to be fed-up playing for a club that despite it's illustrious history have't been able to bag any major title in the last many years. The Gunners for the first time in decades are out of the Champions League.

The five-goal humiliation to Bayern Munich both home and away, a few months ago, was the ultimate denouement. The Chilean striker and two-time Copa America winner has scored 53 times for Arsenal from his 103 appearances for the club and it is hard to imagine that the Gunners will have a better season this time without him.

Mesut Ozil will probably remain at the Emirates. Given his below par form in the 2016-17 season there are no clubs gunning for him.

Wenger seems to be to be taking no chances in the light of Sanchez's uncertain future at the club. It's rumored that a mind-shattering £125 million deal to lure 18-year old boy wonder of Monaco, Kylian Mbappe, from the likes of big suitors like Real Madrid is on the cards.

Another Arsenal target is Alexandre Lacazette of Lyon. The prolific 26-year Frenchman has become the 4th highest scorer in Lyon's history. He has banged in 37 of his 129 goals for the club in the 2016-17 season alone, a testimony to his blistering current form. The reported transfer amount doing the rounds is in the region of £57 million although it could ultimately settle in the region of £45 – £50 million.

Another Frenchman showing interest in moving to Arsenal is 21-year old AS Monaco midfielder, Thomas Lemar.

Lemar's ability to play on both wings is what has drawn Wenger's attention. But Monaco could play hard ball as they are actually not in need of cash anymore. They have already sold Bernardo Silva and Tiemoue Bakayoko for £45 million and £40 million to Manchester City and Chelsea respectively.

For all their frantic scrounging for French talent, the Gunners may ultimately have to settle for someone like Leicester City winger, Riyad Mahrez. Tense days lie ahead at the Emirates.