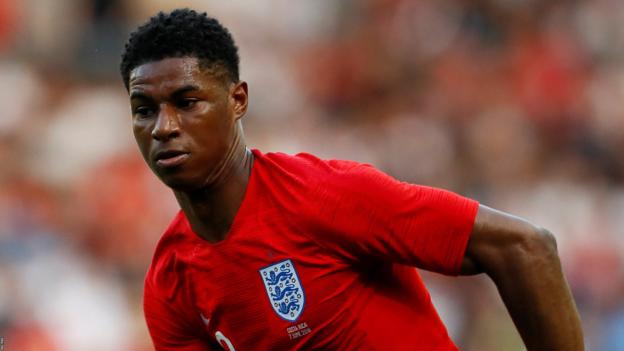 England put up a defensive horror show when they allowed Netherlands to get the better of them 1-3 in the UEFA Nations League semi-finals at the Estadio D.

Alfonso Henriques in Guimaraes, Portugal on Thursday night. Ronaldo Koeman's men emerged deserving winners in the 30 minutes of extra time after an hour-and-a-half's play in which both teams finished on 1-1.

England went into half-time on the back of a Marcus Rashford's penalty in the 32nd minute but Ajax boy-wonder Matthijs de Ligt brought parity with a 73rd minute equalizer when he took advantage of some poor marking to head the ball downwards past goalkeeper Jordan Pickford.

England could have the match wrapped a little before the final whistle when Jesse Lingard drove the ball into the Dutch net only for the VAR to intervene and rule the goal as an offside.

England looked menacing when they attacked even though the Dutch looked the superior side.

But some catastrophic defending in extra time took the game away from the English. John Stones was dispossessed by Memphis Depay who shot a low powerful drive that forced a brilliant save from Jordan Pickford, but Kyle Walker in a suicidal move bundled the rebound into his own net when he was pressurized by an onrushing Quincy Promes trying to pounce on the loose ball.

That was the 97th minute of play.

England produced more horrific defending, this time Ross Barkley getting caught in possession from another poor pass from Stones, leaving Memphis to offer up a simple finish to Quincy Promes and putting the match beyond England's reach with just 6 minutes of the game to go.

In a surprising move, Gareth Southgate left out Champions League finalists Harry Kane and Jordan Henderson, probably to give them a rest.

By contrast Koeman started off with both Liverpool stars Virgil van Dijk and Georginio Wijnaldum and played them for the entirety of 120 minutes.

Virgil van Dijk looked every inch the leader of the Dutch side while De Ligt and the brilliant Frenkie de Jong showed why they had all the makings of truly outstanding players at the back.

English forwards Raheem Sterling, Rashford and Lindgard looked brilliant in patches only and did land themselves opportunities to score.

But, the normally dependable John Stones and Harry Maquire were shambolic at the back and it was some stellar goalkeeping from Pickford that made up for the countless defensive errors they made.

Netherlands now get ready to meet Portugal who a day before swamped Switzerland 3-1 on the back of a Cristiano Ronaldo hat-trick prompting Portugal manager Fernando Santos to describe the ex-Real Madrid star as “a genius”.

Ronaldo, 34, had given the hosts the lead with a stunning 34th minute free-kick that flew into the bottom-right corner, catching Swiss goalie Yann Sommer on the wrong foot.

Switzerland equalized through a Ricardo Rodriguez penalty in the 57th minute. Just when the match seemed to be heading towards the 90-minute full-time on level terms, Ronaldo made his impact felt, sweeping Bernardo Silva's cross into the corner of the net in the 88th before firing into the same spot a minute-and-a-half later.

The final match will be played at Guimaraes on the night of Sunday, June the 9th.