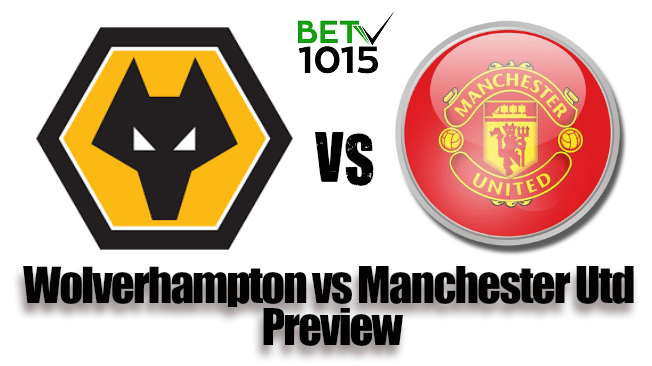 Half Time/Full Time prediction: Draw/Wolverhampton at 15/2 with Bet365

Wolverhampton 1-1 Manchester United at 6/1 with Bet365

In his first away game as the permanent manager of Manchester, Ole Gunnar Solskjaer will make a difficult trip to the Molineux where Wolverhampton had put an end to the Red Devils' FA Cup hopes not very long ago.

Nuno Espírito Santo's Wolves have a fully fit squad in the run-up to tomorrow night's game. Ryan Bennett who did not feature against United in the FA Cup owing to a red card suspension will be back for April 2nd's clash.

Goalkeeper John Ruddy should make way for regular custodian Rui Patricio. The West midlands club's form this year has bordered between brilliance and the very ordinary. Wins over Tottenham Hotspur and Chelsea have been counterbalanced by losses to lower-half sides like Huddersfield Town and Burnley, the latter one coming as recently as last weekend.

But they have been formidable at home, winning all their six previous fixtures across all competitions.

United will have to watch out for the goal scoring prowess of forwards Diogo Jota and Raul Jimenez who have a combined tally of 22 goals between them in the current season.

The Wolves Predicted XI in a 3-5-2 formation:

For Manchester United, Alexis Sanchez is not expected to be available for the Molineux match, still recovering from an injured knee. Defenders Antonio Valencia and Matteo Darmian were both sidelined during the weekend at Watford. Anthony Martial's fitness could be assessed after being forced off with a knock in the latter stages in United's win over Watford on Saturday. In such a case Marcus Rashford, Romelu Lukaku and Paul Pogba will spearhead the United attack. The 24-year old Martial is expected to feature though.

Manchester United Predicted Starting Line up in a 4-3-3 formation:

Manchester United’s unbeaten league start under Ole Gunnar Solskjaer finally came to an end when they were beaten 2-0 at Arsenal which in itself was a big comedown off the back of their dramatic late aggregate win against Paris Saint-Germain in the Champions League. This was followed by a tepid 2-1 win over Watford at Old Trafford.

Of the 5 times these two have met since 2011 in all forms of competitions, both have shared 2 wins each.

United’s last Premier League betting tie with their forthcoming rivals had ended in a 1-1 draw at the Old Trafford in September last year. Which is why the odds for Tuesday night's game are even-stevens. It could turn out to be one of the toughest games the Red Devils will have played in recent times and they would have to be at their best to win it.

For Solskjaer, a win is a must for his aspirations of being in the Top four. Arsenal's Monday night's Emirates game against Newcastle could probably have a bearing on that score.