Manchester City will make the trip to Wembley Stadium this Monday evening to face Mauricio Pochettino’s Tottenham Hotspurs. Man City may be the favourites to win this clash but they face fierce opposition in a Harry Kane-led Spurs.

The Lillywhites are 16/5 outsiders to clinch a victory on home turf, while Pep Guardiola’s men are 3/4 favourites in our betting tips and a share of the spoils of war being projected at 16/5.

While Spurs have struggled in recent games despite winning, we’re forecasting them to take things up a notch in this Monday’s clash against Man City.

A Harry Kane-led offence has been inspiring, but the shining star has to be Lucas Moura. The Brazilian has found a fifth gear this season, scoring three goals in his opening nine starts in the Premier League amidst a bout of impressive performances.

The first of our Tottenham vs Man City predictions see the 26-year-old making the score-sheet first, with odds of 11/1.

His link-up play with Kane, Christian Eriksen and Dele Ali should also warrant a mention, and City’s defensive midfield will have to snuff out his attacking creativity with tight man-marking.

Yet despite playing away from home, the Sky Blues will need no prompting to shift into ‘attack’ mode, as they did in their 5-0 decimation of Sean Dyche’s Burnley last weekend.

The sheer number of attacking options available to Guardiola means that there are multiple threats posed to Spurs in this City side; if it’s not Sergio Aguero, then it’s Gabriel Jesus, if not Gabriel Jesus, then Riyad Mahrez.

The latter man has a successful pass percentage of 85%, with three goals to his name, and if Spurs aren’t wary, he could pose a serious threat on the counterattack

Mahrez is betting to score first at 11/2, yet if these odds don’t satisfy the palate, scroll down for our Tottenham vs Man City predictions and match betting tips. 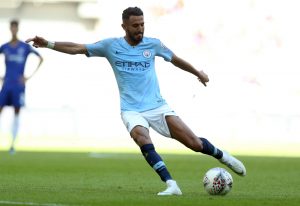 Just two of the last 28 league meetings between Spurs and Man City have ended as draws, but our betting tipsters are forecasting this latest encounter to be the third as part of our Tottenham vs Man City predictions.

While City have been prolific in recent years, with Wembley being a fairly new hunting ground for Guardiola, perhaps a 1-1 stalemate is one of the more predictable results.

City struggled against Liverpool at Anfield earlier on this season, managing a 0-0 draw against the Reds. Now, while Wembley is no fortress for Spurs, we’re expecting Spurs to go marching in and use their high-pressing to keep the City offence under wraps.

The defensive midfield duo of Eric Dier and (potentially) Moussa Dembele will be a vital pairing against the likes of Mahrez, Leroy Sane and Bernardo Silva.

We’re projecting them to be effective in their managing of the City attack, with a final score of 1-1. 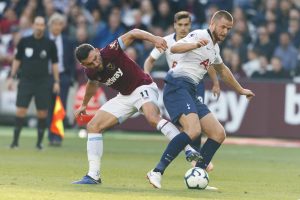 Tottenham will want to start fast on home turf against the League leaders, so the second match bet in our Tottenham vs Man City predictions sees them scoring early, in the first 15th minutes to be particular.

If Spurs want to dismantle City they will have to do it from the onset by pressing high up the pitch, and they possess the players to do so in Erik Lamela and Heung-Min Son.

Lamela has been directly involved in four goals in five Premier League games this season (three goals, one assist), the same total he registered in 25 games last term.

Leading from the front, the two have a proclivity to press hard in the opponent’s defensive third, and it is exactly this kind of persistence that could undo Man City.

The man with the strongest chance of making the score-sheet for City has to be Sergio Aguero.

The Argentine has bagged seven goals in his opening nine Premier League appearances and has finally gone up the pecking order into the limelight.

Up against the Spurs defenders, his strength on the ball combined with his striking ability will make him a handful to deal with, and direct supply from players like Silva and Mahrez to Aguero will need to be cut out.

But let’s face it: a rampant City offensive line-up means there will be countless opportunities for Aguero to convert in front of goal and we’re betting that he’ll take one of them in this Monday’s game in our Tottenham vs Man City predictions.

Spurs have lost 10 of their last 15 Premier League games against Man City (W4 D1), having lost just three of their first 27 games against them in the competition.

Tottenham have won seven and lost none of their last nine Premier League games played on Monday (D2), with their last defeat coming against Norwich in April 2012 (1-2).

Man City are unbeaten in six Premier League away games in London (W5 D1), winning the last four in a row. The Citizens could become the first non-London side to win five consecutive Premier League games in the capital.

Man City are unbeaten in their last 15 Premier League games (W12 D3), since a 2-3 defeat to Man Utd in April. City have conceded just six goals in those 15 games and never more than once in a match during this period.

Man City boss Pep Guardiola has lost just two of his previous 13 managerial clashes with Mauricio Pochettino (W7 D4 L2) – Guardiola could win three in a row versus the Argentine for the first time.