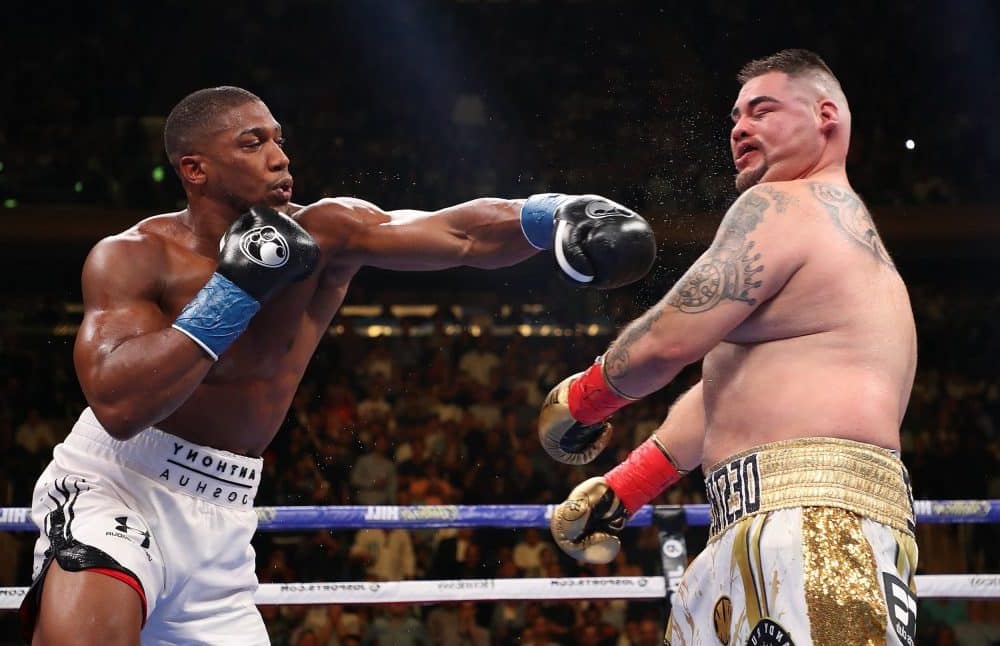 Andy Ruiz and Anthony Joshua will renew hostilities on Saturday, December 7 in Saudi Arabia in a repeat or revenge affair. Headlining in the hastily-assembled Diriyah Arena, the event has been titled “Clash on the Dunes” given its unorthodox and contentious location.

Few gave Mexican-American Ruiz much of a hope in the first fight as the 30-year-old stepped into the limelight following the discovery that original Joshua foe Jarrell “Big Baby” had been caught using illegal substances.

Despite his pudgy appearance Ruiz is a natural fighter, whose hand speed, and ability to find the target first and often, played havoc with Joshua’s slack defences.

Whereas he gave the impression of being a starstruck fan in New York in June, he now enters the ring in Saudi as a man expected by many to once again upset promoter Eddie Hearn’s best laid plans.

Whenever the big boys clash there is always the very real chance that someone is getting knocked out.

Both men were down in the first fight, but Ruiz seemed to be puncher (or the man able to reach the target more powerfully and consistently). For Joshua the most likely method of victory is by a 12-round point decision, picking up points behind his strong left jab.

Most reputable UK betting sites have Joshua at 4/9 for the win, including Bet365 and William Hill.

Ruiz, who knows he has the power to hurt the challenger, is 7/4 with both of those establishments.

Paddy Power have an Andy Ruiz KO victory priced at 25/1 from rounds 4-8.

Anyone expecting AJ to come out all guns blazing and catch Ruiz cold might be tempted by Paddy Power’s 25/1 and 20/1 for a KO in rounds one or two respectively for the Londoner.

While Ruiz holds three of the four belts that really matter, the fourth is held by America’s Deontay Wilder.

The Alabama native is a ferocious finisher who has a reputation for knocking opponents out cold with his chilling one-punch power.

Wilder drew with England’s Tyson Fury last December, and the pair have agreed to a rematch in February, 2020, pending a clean bill of health for the “Gypsy King” who was badly cut in his most recent fight.

Anthony Joshua is tentatively affiliated promotionally to the American streaming service DAZN (who work closely with Hearn), while both Ruiz and Wilder are with the PBC which would seemingly make a matchup easier to arrange. Fury works with ESPN and veteran promoter Bob Arum.

What Time is the Andy Ruiz and Anthony Joshua Fight?

None of this will be of any concern to the two combatants come Saturday evening (ring walk due around 8.45pm UK time).

Ruiz will be hoping to use his squat figure to his advantage as he did so well in the first fight.

Joshua did not look himself in the lead-up to that bout and conspiracy theories have floated around speculating on why this was.

When Joshua dropped Ruiz in round three it appeared we were all set for a business-as-usual evening for the London puncher. What transpired was a shock to the system; not least the champion’s.

Seconds after being floored, Ruiz scrambled “AJ’s” senses with a combination of his own.

Suddenly the UK favourite was down himself, twice in that same outstanding third round.

Joshua tried to regroup but was skating on thin ice right up until the seventh round where he was dropped twice more.

Referee Michael Griffin did not like Joshua’s responses as he ambled around in the neutral corner and the third man proceeded to stop the fight.

Fans accused Joshua of effectively quitting. In a recent episode of a Sky TV promotional face off, Ruiz agreed that it appeared the defeated man had indeed quit. Sky will show this rematch on their Box Office platform at a new £24.95 price point.

A heavy-hitting undercard consists of some of the more well-known heavyweights around on the scene today. Two former Anthony Joshua victims, Alexander Povetkin and Dillian Whyte, have differing levels of opponents.

Whyte, whose inclusion is misty given he has still not presented a resolution to a failed drugs test in the UK, faces Poland’s Mariusz Wach.

Russia’s Mahammadrasul Majidov, 1-0 as a pro, also features. He beat Anthony Joshua in the amateurs.