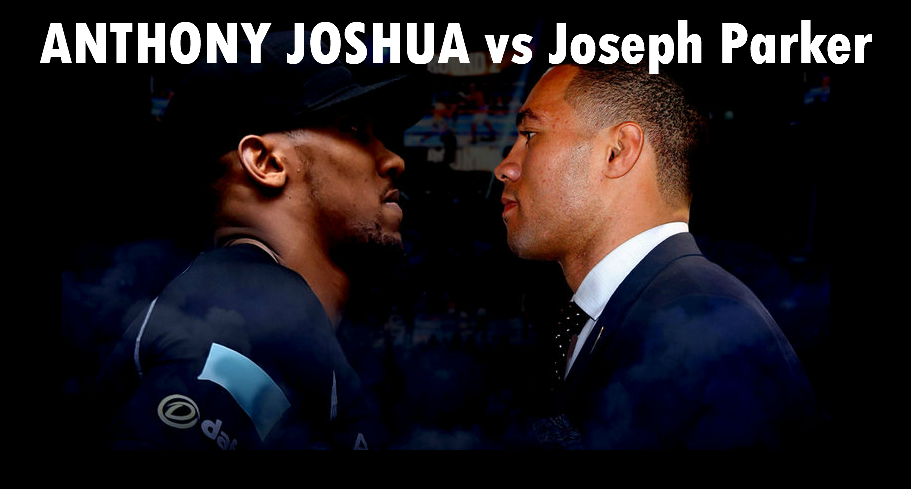 ANTHONY JOSHUA and Joseph Parker will clash for a large portion of the heavyweight silverware on Saturday, March 31 in Cardiff’s Principality Stadium. Joshua brings to the table the IBF title he knocked out overmatched American southpaw Charles Martin for in round two of their fight and the WBA ‘super’ title he claimed off Wladimir Klitschko after a stirring 11th-round knockout at this same Cardiff location in April, 2017.

Parker, meanwhile, holds the WBO belt that he won in a vacant title scrap with talented but out-of-shape Mexican-American Andy Ruiz Jr in December, 2016. Parker has since defended that title against former sparring partner Razvan Cojanu and most recently enjoyed a points win over Hughie Fury in the challenger’s hometown of Manchester.

Joshua was last seen knocking out replacement opponent Carlos Takam in slightly controversial fashion as the French-based Cameroonian was never in danger of winning the contest but appeared to be manoeuvring around Joshua’s heavy-handed attacks with enough consistency to warrant hearing the final bell. Referee Phil Edwards felt otherwise and terminated the bout with Takam under pressure in round 10.

Interestingly, Parker outpointed Takam prior to his own world title opportunity and looked severely gassed out in the latter stages of the fight after a strong start. Will this have a bearing on the Joshua fight given that we have some sort of measuring stick, with Takam as a common opponent?.

The value for Joshua therefore will come from round bets on the knockout rather than just picking him to win.

Punters may fancy Joshua to gain his second wind, similarly to how he did against Klitschko, and stop the smaller man in the 11th or 12th round, which comes in at 20/1 and 25/1 respectively with William Hill. With the same bookmaker, Joshua fluctuates around the 11/1 mark from rounds 3-8 which represents where a lot of the smart money is going as backers see the Londoner as a bet to dismiss his fellow champion in the mid-section of the fight.

Parker comes in with Sky Bet at an enticing 6/1 and Betfair at 13/2. Parker is 16/1 to win on points with William Hill but if he even lasts the distance will he be able to put enough rounds in the bank (a minimum of seven to win 115-113, the lowest total above the draw) to get the nod on the judges’ scorecard in what is effectively Joshua’s backyard?.

The draw is, as always, a fairly unlikely scenario and comes in around the usual 33/1 region. Parker is fit, strong and has negotiated the championship distance a few times before so who says he cannot outlast Joshua (who notably slows down after the middle point of fights) and score a knockout himself?.

Parker is 100/1 to KO Joshua in rounds 9-12. That would more likely be an accumulation stoppage rather than a huge heavyweight one-punch ending, comparable to the type of come-from-behind crushing finish that George Foreman dished out on Michael Moorer in their 1994 double-title clash in Las Vegas.

Parker has previously been introduced to the UK fighting audience with his YouTube fight against Fury but that that was possibly not the best display of his talents given that it was messy, scrappy and Hughie Fury neglected to throw many scoring shots at all. Parker struggled to close the range effectively and used raw aggression to win many of the rounds rather than clean, effective punch picking.

Waiting in the wings for the winner here would be WBC champion Deontay Wilder who will be seated at ringside for the big clash. Wilder holds the only other meaningful belt on the world scene (some would argue the auspicious WBC is the most credible of all crowns) and calls for a mouth-watering clash with Joshua will intensify if ‘AJ’ dispenses with Parker in impressive fashion. Wilder, who was last seen knocking out Cuban dangerman Luis Ortiz after an excellent back-and-forth contest, may wish to storm the ring post-fight but show promoter Eddie Hearn has said that the Alabama native will be restrained if he attempts to do so.

I expect Joshua to get the job done here; probably inside the distance. His gas tank and stamina reserves have always been a slight issue but he appears to be coming in lighter than in previous outings to combat this potential drawback. Some suggest Parker is effectively “cashing in” his WBO belt for the suggested $5.5million purse he is expecting to receive, in much the same way the hapless Charles Martin raced across the pond to hand over his IBF belt with minimal resistance.

I don’t think that a proud fighter like Parker, who speaks strongly of the Maori blood and warrior traditions, will be handing over anything in a hurry and if he is stopped within the early portion of the fight, as some have predicted, it will be more to do with Joshua’s powerful, accurate shots being too much for the 26-year-old New Zealander to handle than any premature folding on Parker’s part.

The key to beating Joshua is not only to employ a high work rate and good movement but to consistently move forward and deny Joshua the time and space to get his shots off. If “AJ” is able to establish range and push you back then you’re effectively finished and suddenly those shorter odds on a mid to late round KO begin to explain themselves. Parker has a fairly agricultural style and will need to attack the body, touch the ribs and bring Joshua’s hands down to exploit the head. Parker’s head coach Kevin Barry is an experienced trainer who has trained the likes of David Tua in the past and once boxed Evander Holyfield in the 1984 Olympics.

That aside, Parker will be the only man in the ring against Joshua on Saturday night and despite a strong effort I think he will be removed in or around the 10th session. A 10th round knockout for Joshua weighs in at 16/1 with William Hill.