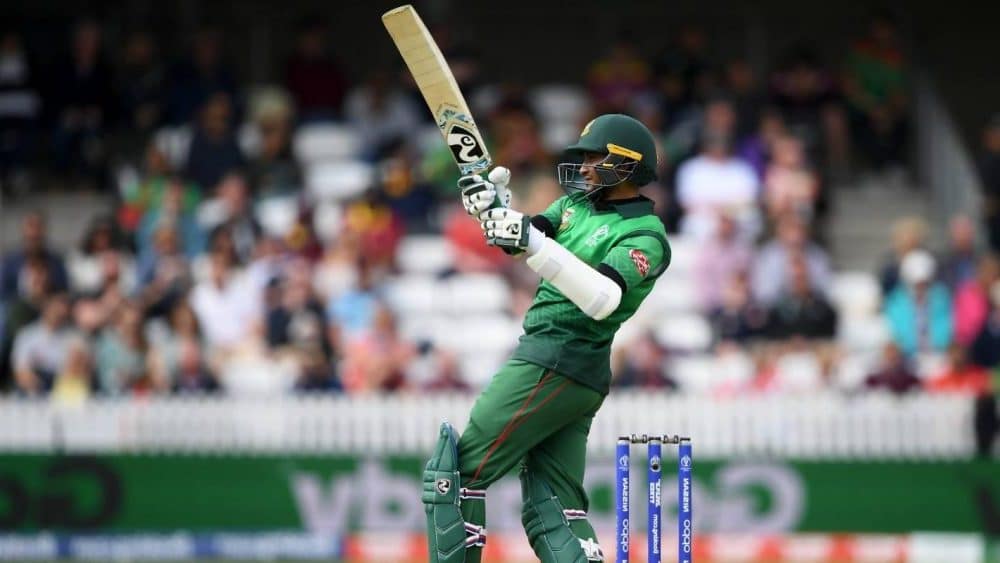 Bangladesh talisman Shakib-al-Hasan's unbeaten 124, his second of the present World Cup, helped his team record the second-highest run chase in the tournament's history when they overhauled a West Indian score of 321 for 8 at Taunton. The Bangladeshis made short work of the massive total put up by the Caribbeans and won with as many as 51 balls to spare.

The sub-continent side made a bright start with opener Tamim Iqbal and Soumya Sarkar pulling and cutting the ball but the fall of 2 quick wickets left the game evenly poised at 133-3 from 19 overs. Shakib along with debutant Liton Das put on a record unbeaten 189 stand for the 4th wicket that saw the Tigers record probably the most emphatic win of the championship. While Shakib reached his hundred in 83 balls, Liton Das accumulated runs calmly before sensationally exploding, belting Shannon Gabriel for three consecutive sixes. Das, who hit a boundary to take Bangladesh to their target, finished on 94 not out off 69 balls, getting his last 44 runs off just 26 balls.

West Indies' 321-8 was built around Shai Hope's masterful 96, Evin Lewis' entertaining 70 and a savage 50 from Shimron Hetmyer of 26 balls. But evidently that was not enough. The Windies at one stage looked as if they could cross the 350-mark given that they were 242/3 from 39.3 overs and a little more than ten overs to go. But with the hard-hitting Hetmyer getting out on the score, coupled with a lack-luster show from an injured Andre Russel and some brilliant death-overs bowling by Bangladeshi paceman Mustafizur Rahman, skipper Jason Holder’s men were restricted to 321.

West Indies went into the game without a spinner, but with five fast bowlers, assuming that short-pitched bowling would bring them the same positive results as it did in their earlier games against Pakistan and South Africa. But against Bangladesh it simply backfired as rival batsmen made mincemeat of their attack. Holder's side now face the daunting challenge of having to win all their four remaining games, including tough matches against India and New Zealand both of whom have not lost so far.

Monday's game was no shock, as Bangladesh have now won five one-day internationals in a row against West Indies and outperformed them in all aspects. According to captain Mashrafe Mortaza, his work is cut out for the rest of the tournament. Not unlike the deflated Caribbeans, they, too, have a couple of very tough encounters on the cards against India and Australia, but being 2 points and a couple of places ahead of the West Indies and 5th on the points table, Mortaza will feel much-better placed than his yesterday’s rivals as far as his chances to make it into the Final Four are concerned.

To add another dimension to the tournament, Bangladesh's Taunton victory reversed an over-powering trend in the current edition of the World Cup, where a team batting first and putting up 300 plus runs on the board have always won.