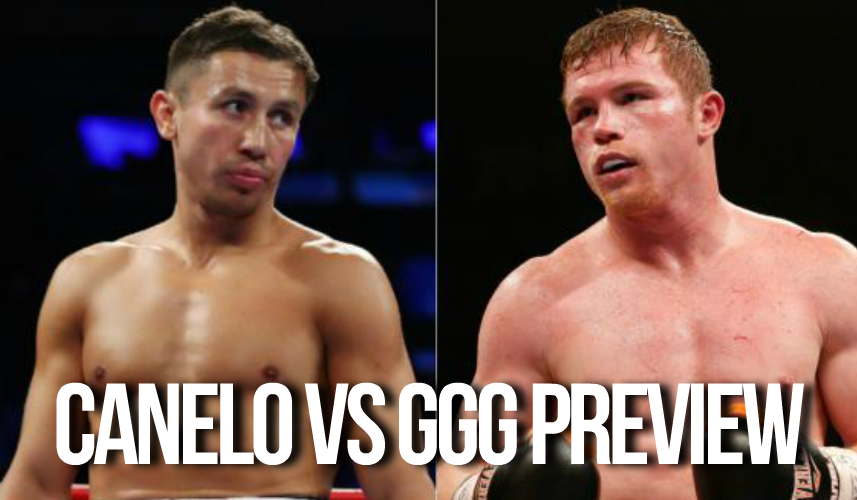 Gennady ‘GGG’ Golovkin and Saul ‘Canelo’ Alvarez clash in a genuine super fight on Saturday, September 16 in Las Vegas. Our boxing expert, with 12 years in the game and over 150 shows attended gives his preview and verdict on the Canelo vs GGG fight. [toc]

Canelo’s only defeat came at the talented fists of Floyd Mayweather Jnr in 2013 and even though Golovkin’s uncompromising attitude in the ring and likeable personality outside of it, has captured the imagination of fight fans worldwide, Alvarez is the money draw and star attraction.

Golovkin favourite at 4/6 with Canelo coming in at 5/4.

The draw sits at its usual spot around 20/1 with most bookmakers.

Where to Bet on Canelo vs GGG US Betting Odds

If you’re looking for a knockout either way then the betting, as often is the case, closely reflects the consensus of the fight amongst fight fans, scribes and pundits.

Alvarez’s massive price for an early knockout and odds around the 60/1 and 70/1 region late in the fight are indicative of Golovkin’s physical strength, cast iron chin and strong recuperative powers.

On the latter point, has the Kazakh fighter ever had to even display any great recuperative powers?

He can be hit fairly easily at times (more by presenting the opportunities to lacklustre opponents in his earlier fights, it must be said). However can he be hurt?

A clip of Golovkin taking a flush shot bang on the chin from a much bigger Danny Jacobs -who can punch a bit too- with little to no effect, circled the internet after their fight earlier this year.

I recall speaking to Matthew Macklin in 2014 about his experiences when trying to defeat the beast, live on HBO in 2013. Matthew spoke of Golovkin’s underrated ability to manoeuvre opponents around the ring. Not only on the end of his ramrod jab but also with his subtle footwork and movements that work his foes hard, often without even throwing a shot. Canelo will have to find a way around this and he certainly has the talent to be able to do so.

But does Canelo have the stamina and the gas tank down the stretch?

The value for money may lie in the 11th or 12th where the Kazakh could conceivably take over. This has led some to fancy the enticing 8/1 on a Golovkin KO, in rounds 10-12 inclusive.

Golovkin punches with thudding authority, boasting an 89% KO ratio. Even his jab can send shudders down the spine of decent world level operators, such as David Lemieux whom he controlled from start to finish.

American speculators may look over at Sportsbetting.ag for some joy. A Golovkin majority decision coming in at +1380, against any other result at -1725.

Can Golovkin do enough to impress the Las Vegas judges in his first venture to Nevada?. Time will tell but given that judge CJ Ross managed to find a 114-114 card during Alvarez’s seemingly one-sided loss to Mayweather, there is cause for concern.

Questions have been raised about the judging appointments this time, with veterans Adelaide Byrd and Dave Moretti under the spotlight. Third judge Don Trella is generally perceived as a good pair of eyes. He has been afforded little scrutiny compared to the other two.

A solid +685 on Canelo snatching a split decision victory, therefore, may tempt punters in for a flutter.

“I know this is the biggest day for boxing, for this era. It will be a huge history fight,” said Golovkin, in his usual understated manner. “This is a fight boxing can be proud of. It is boxing's biggest fight. It is a fight for history. It's a real Mexican fight. Everyone will remember this fight. Canelo is No. 1 in Mexico, a country known for great fighters. He is very special.”

If I had to lay my cards on the table I’d favour a Golovkin split decision.

He’ll have to clearly take eight of the 12 rounds if he’s going to have any joy on the jduges’ score totals. Even though Alvarez tires late on in fights I’m not as swayed by the late KO as other observers.

Has GGG slipped a little or were there mitigating factors behind the performances against Kell Brook and Danny Jacobs?. He looked less than human in the latter. However that’s what happens when the level of opposition hits a steep incline. Even great fighters find it more difficult to dominate.

A multitude of questions, without any clear-cut answers proves that this is a tantalising 50-50 matchup, the likes of which, fight fans have been treated to on a more regular basis in 2017. Long may that continue.