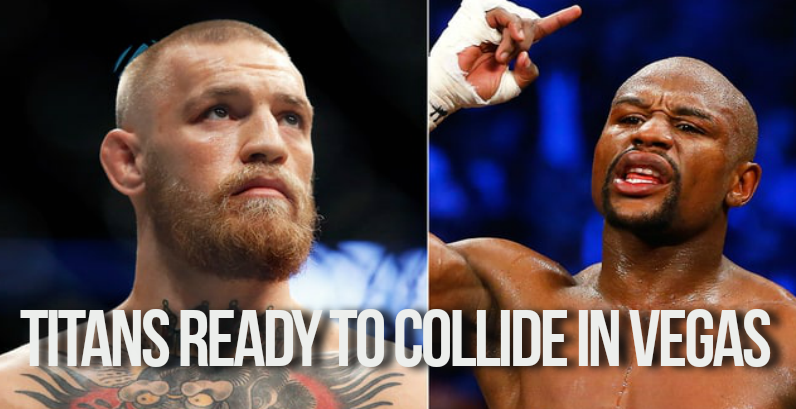 The big fight is ON. Conor McGregor vs Floyd Mayweather will take place on August 26 in Las Vegas. While both men are international superstars and money magnets, they are poles apart in terms of boxing experience.

Mayweather is unbeaten in 49 fights and chasing the opportunity to go 50-0 and surpass Rocky Marciano’s long-held undefeated status. McGregor, on the other hand, is making his professional boxing debut.

Whenever the Conor McGregor vs Floyd Mayweather date was first proposed it appeared that early June was the preferred time and Las Vegas the natural home for the bout.

Indeed, the MGM Grand, that has held so many of Floyd’s money-spinning contests over the years, was initially expected to hold the blockbuster event but the 20,000-capacity T-Mobile Arena has since been pencilled in.

Showtime will televise the event via their pay-per-view platform and sales should not be affected too much by the fact that American network rivals HBO are also running on the same night, as Miguel Cotto and Yoshihiro Kamegai clash in California’s StubHub Centre.

Oscar De La Hoya is Not Happy with the Schedule

One person who has been extremely vocal in his disdain for the fight is former world champion, and ex-Mayweather opponent, Oscar De La Hoya.

Perhaps much of De La Hoya’s contempt, however, stems from the fact that his own blockbuster attraction, Gennady Golovkin vs Saul ‘Canelo’ Alvarez, takes place just three weeks later and Oscar is concerned that Floyd and Conor may steal some of his thunder and revenue.

Can McGregor Pull it Off?

Realistically, it would appear to be a stretch to suggest that McGregor will win a succession of rounds, let alone the fight itself. The aforementioned Alvarez struggled to win rounds against Mayweather.

The Mexican was, and is, a top-class athlete, competing at the absolute pinnacle of the sport.

Despite McGregor’s impressive MMA background and Combat Sport grounding, how can a boxing novice be expected to step into the ring for the first time and outbox the master?

That said, the Irishman does have some basic training in the noble art.

However as many observers have suggested, it doesn’t exactly lend itself to making a case for victory on August 26.

Conor briefly trained in Dublin’s Crumlin boxing club many years ago and has been videoed doing boxing-related preparation of sorts.

The most solid footage we have available is a short sparring session with moderately-talented South African pro boxer Chris Van Heerden in 2016, see the video below where McGregor showed flashy moves but little substance and struggled to cope with the conventional boxing skills of southpaw Van Heerden who is a reasonable championship contender at best.

It is unlikely that despite its mass appeal, the bout will generate more pay-per-view buys that Mayweather vs Manny Pacquiao. This  persuaded 4.4 million people to part with their hard-earned cash.

With hundreds of millions expected to be generated by the mega-event, Mayweather could be earning upwards of $100 million and McGregor topping $70 million.

These are mind boggling numbers for a perceived mismatch, which many ardent boxing observers perceive this to be.

Putting aside the derision and scorn poured upon the fight by hardcore boxing fans (threatened by MMA/UFC and protective of the purest form of combat, as they see it) the betting line in America tells a different story as money floods in on McGregor.

The graphic below shows how a McGregor win would provide a more stringent return on investment than Floyd’s most recent outings. 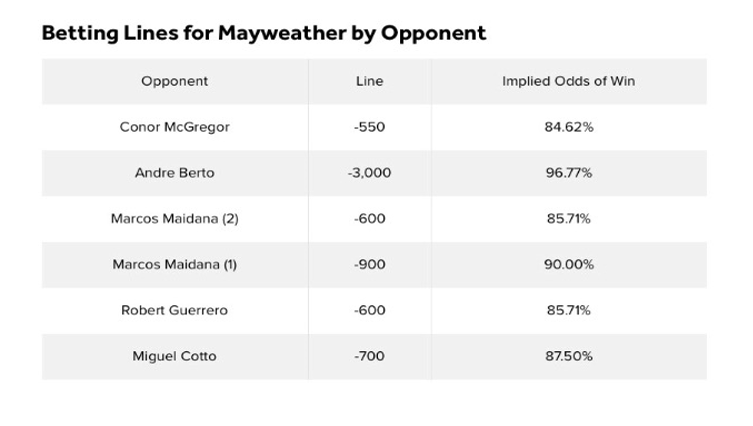 Big players on the UK and Irish gambling scene, Paddy Power, sent out a tweet suggesting that a large percentage of bets had been piling in on McGregor. Floyd, however, is rightly a resounding betting favourite with most of the bookmakers.

Paddy Power are pricing him as 1/6 while Sky Bet and William Hill go slightly wider at 1/8 and 1/7 respectively. McGregor is 4/1, 5/1 and 9/2 with a host of other establishments, including Ladbrokes and Coral.

For the US market, Bovada have Mayweather at -550 and McGregor at +365. Savvy UK punters have already identified the 9/4 on a Mayweather 12-round points verdict being offered, as a way to cash in on this lopsided affair.

This seems decent value as even though I expect Floyd to dominate the fight, I am not as convinced as others that he will knock McGregor out.

Floyd has notoriously brittle hands which is part of the reason he has opted to outclass his opponents rather than stop them in recent years. Conor’s relative boxing novice status may mean he walks on to a big shot as the fight progresses.

Mayweather hasn’t knocked anybody out since a brash Victor Ortiz was effectively sucker punched to defeat in 2011 but strange things do happen.

What if we were to witness a situation similar to the recent David Haye vs Tony Bellew fight where Haye’s overwhelming status as favourite quickly dissipated when a knee injury midway through the contest seriously levelled the playing field?

Freak accidents aside, I don’t know how McGregor can even win a round seeing as so many high-quality professional boxers have failed do just that in recent years.

The argument that Mayweather's inactivity could be a factor is negated by the observation that he is used to long spells of inaction and only fighting once a year. He keeps himself in supreme condition so is unlikely to have become an “old man” suddenly.

“In the forty-year-old Mayweather we have the remnants of the greatest defensive boxer of his generation,” author Ian Probert commented, on the esteemed British Boxers website. “In McGregor we have somebody who has never laced them up in a professional boxing ring; a novice who in reality would struggle to exceed journeyman status in this country, let alone compete on the world stage with an elite opponent.”

My pick is for Mayweather to win on a wide, unanimous points decision but can also envisage a scenario where a bruised, bloody and battered McGregor gets withdrawn as the fight nears the final rounds.

The Dubliner’s bravado, brashness and confidence will keep him around during the fight and make the build-up eminently watchable but he simply cannot beat the best fighter of an entire boxing generation.

Regardless of the outcome, mark the Conor McGregor vs Floyd Mayweather date down in your diaries, as the spectacle will be something to behold.