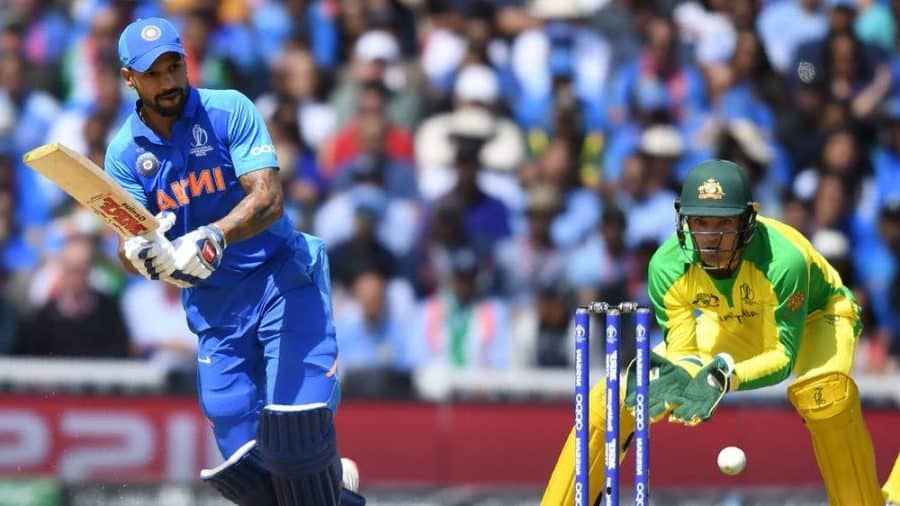 India's progress in the ICC World Cup 2019 has been in line with expectations given that they are one of the favorites to take the title. After beating South Africa in their opener on June 5th, the sub-continent giants gave a clinical performance this weekend against the powerful Australians and put two more points on the board. Both Rohit Sharma and Shikhar Dhawan have helped themselves to a century each from the two games and have stamped their reputation as the best-ever opening pair in the history of ODIs (One-day internationals/50-over format). Dhawan's 117 from 109 balls is definitely among the better knocks played in the current World Cup. This despite an injured thumb sustained early in the innings against a rising ball from Australian paceman Pat Cummins. Speedster Jaspreet Bumrah and spinners Yazuvendra Chahal have been among the wickets and have played a big hand in both of India's win in the tournament.

India's prime worry will be whether the 33-year old Delhi born Dhawan will be fit enough to play in their third fixture against New Zealand on June 13th. Dhawan's absence on the field during the entire 50 overs when Australia batted (Ravindra Jadeja was sent as a substitute) sparked fears of his injury being a long term one which could subsequently keep him out of India's upcoming pivotal clash against the Kiwis, something that has reportedly been confirmed. Dhawan was hit twice on his hand, first in the 9th over when he tried to negotiate a stinging short ball from Cummins when he was on 24. With Dhawan out for 3 weeks at least, all-rounder and middle-order batsman Vijay Shankar could come in with KL Rahul opening the innings with Rohit Sharma.

Although the New Zealanders may not be the tournament favorites, they are one side no one is comfortable facing. They are now at the top of the heap having won all their three games, brushing aside Sri Lanka, Bangladesh and Afghanistan with ease. But then, the Kiwis have a phenomenal track-record against the bottom-half teams of Test-playing nations. India will be the first truly formidable opposition they will be running into in the WC 2019. For Indian front-line batsmen, negotiating left-arm pace-bowler, Trent Boult, under conditions that help seam bowling could be a major worry. Boult's figures in his previous three matches have been 5/21, 3/39 and 4/33 which is deadly by any stretch of imagination. In fact, he was the chief destroyer of the Indian batting in a warm-up game played a fortnight ago in which New Zealand won. But with batsmen like Sharma, the unmatchable Virat Kohli, KL Rahul, Vijay Shankar and MS Dhoni peppering their line-up, India could be expected to weather anything the likes of Boult, Lockie Ferguson, Matt Henry, Colin de Grandhomme and Mitchell Santner may have to throw at them. Apart from Boult, Ferguson will be someone the Indians may have to watch out for with his blistering 150 kmph pace and the occasional unplayable bouncer.

The New Zealand batting line-up, with the exception of the world-class Kane Williamson, while destroying lesser-known attacks, could find the pace and movement of Bumrah and Bhubaneshwar Kumar and the spin variations of Chahal and Kuldeep Yadav a bit too hot to handle. India will look to bowl tight and straight because in Martin Guptill, Colin Munro, Tom Latham and James Neesham the New Zealanders have some of the most savage strikers of the ball and anything loose could be remorselessly punished. Williamson and Taylor have been among the top accumulator of runs so far in the WC 2019 and would very much like to keep the momentum going.

The conditions at Trent Bridge Nottingham could be wet or overcast at the best and be perfect for bowlers like Boult, Bumrah and Kumar. Hence, low or medium scores can't be ruled out. India and New Zealand have met on 32 occasions on neutral venues (like the forthcoming one) and share 15 wins each. So, no two sides could be more evenly matched. Both of them are in cracking form, but India having weathered much stronger opposition so far in the tournament look more battle-hardened, which is why the bookmakers’ odds are on them to take Thursday's game.

While all this is being discussed, the threat of rain always persists. Already 3 games have been totally washed out, the latest casualty being the Sri Lanka-Bangladesh clash on Tuesday.