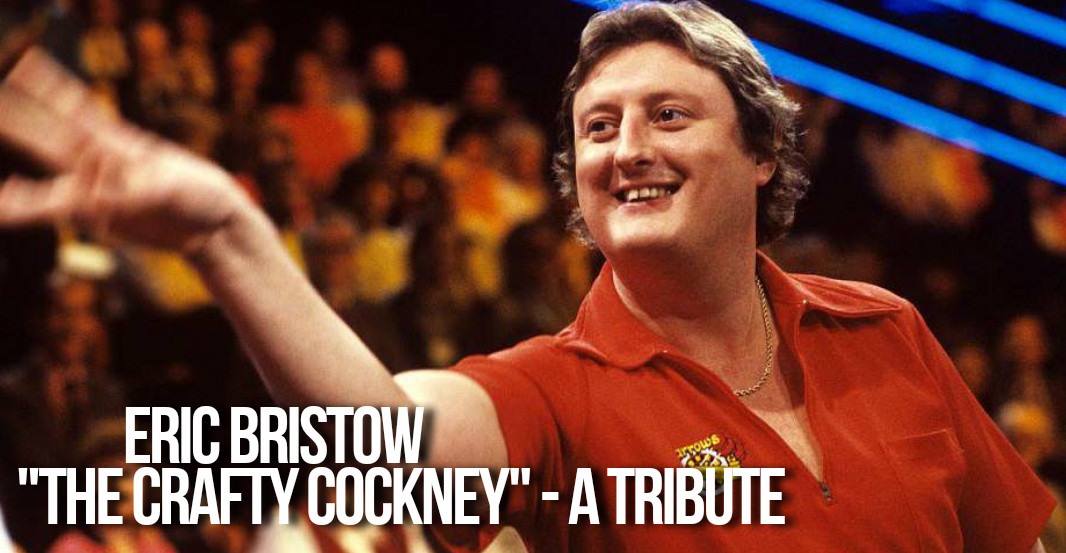 Darts is a sport which has enjoyed a huge rise in popularity in recent years. There are many tournaments played throughout the season, with millions of pounds available in prize money and huge crowds attending events in massive arenas. The sport of darts is in its prime and that’s due in no small part to Eric Bristow, who sadly died aged 60 on the 5th April 2018 in Liverpool.

Bristow was due to attend the Premier League darts event organised by the Professional Darts Association at the Echo Arena but collapsed and as the awful news was announced to the crowd, the thousands in attendance started signing “There's only one Eric Bristow”.

The self-dubbed ‘Crafty Cockney’ was well-known for his cocky style on stage and he played with the confidence and swagger of a man who knew he was the best but Bristow’s beginnings were that of a humble nature.

Bristow grew up in Stoke and was involved in crime during his younger days. School clearly did not agree with him and Bristow was caned on his third day at High School and admitted to carrying a claw hammer in his trousers to protect himself from trouble with other children.

By the age of 15, Bristow had a job as proof-reader for an advertising company but was already making more money winning darts tournaments than he was earning in the job. From this point on, there was little doubt where Bristow’s real talents were to be found and his distinctive throwing style was soon to grace the television sets of the nation.

His first major championship win can be traced back to 1977, well before current stars of the game such as Michael van Gerwen and Rob Cross were born. Bristow won the 1977 World Masters and three years later he won the biggest tournament of all, the World Championship.

The World Championship had only been in existence for two years before Bristow made his mark and he went on to win the tournament five times in total, including three in a row between 1984 and 1986.

However, it wasn’t just Bristow’s undoubted darts ability which earned him many fans, it was the way in which he conducted himself on the oche. In truth, his on-stage demeanour often split the crowd, with many fans enjoying his arrogance and the disdain in which he looked down upon his rivals whereas others despised him for it.

Bristow often played the pantomime villain during darts matches and he was a massive draw, both for the sport and television companies. Eight million people watched Bristow win his first world title against Bobby George live on television and ten million people saw his shock defeat at the hands of Keith Deller in 1983.

Darts may be in its prime now but the 1980’s were something special and Bristow was at the centre of the action. The smoked filled venues, with the players drinking alcohol and smoking on stage to calm their nerves seems a long way from the modern sport of darts we see today.

His throwing action come in for much ridicule when he first arrived on the scene. With his little finger pointing out as if he was at a posh tea party, Bristow would caress his darts into the treble 20 until dart-itis struck, just as he was entering his prime years.

It was at that time when Bristow met Phil Taylor, who volunteered to practice with Bristow in a bid to cure the problem. Little did Bristow know he was about to help form the greatest darts player the world has ever seen.

In 1990, Taylor comfortably defeated Bristow in the World Championship final and the Crafty Cockney struggled, along with the sports itself, to get back in the limelight. Taylor was the man who lifted the sport back to where it is today and upon hearing the news of Bristow’s death, Taylor said, “Eric was like a brother to me – I loved him. Quite simply I owe him everything”.

Eric Bristow was, without doubt, the first superstar of darts and began the process of developing the sport into the one loved by millions of people around the world today. He was a man who riled up a room of Glaswegians in-front of their own player and went on to defeat him, despite receiving verbal abuse and having a full can of beer thrown at him. Bristow revelled in the atmosphere and that match against Jocky Wilson summed up much of what Bristow was about.

Yes, Bristow had his flaws and could upset people with his attitude and the things he said but the same traits were also part of what made him a pioneer of darts and the most feared player of his generation.