Anthony Joshua vs Takam – 6th Round KO the call for AJ 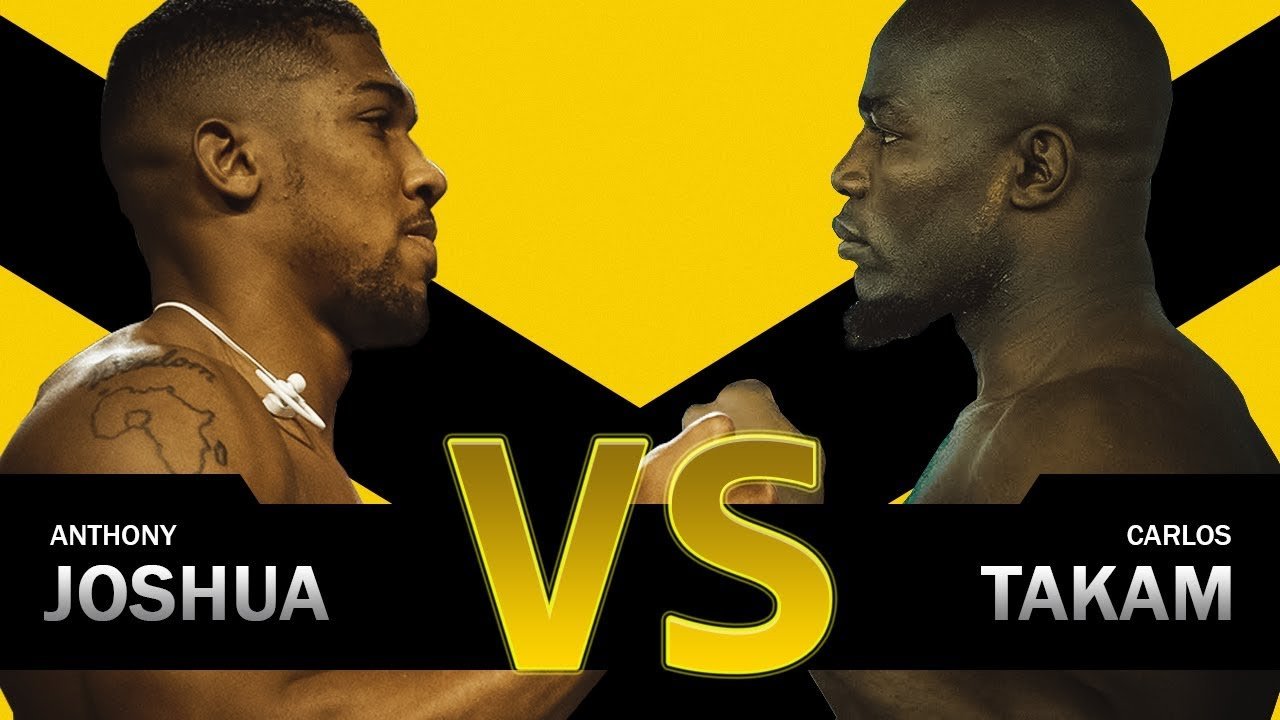 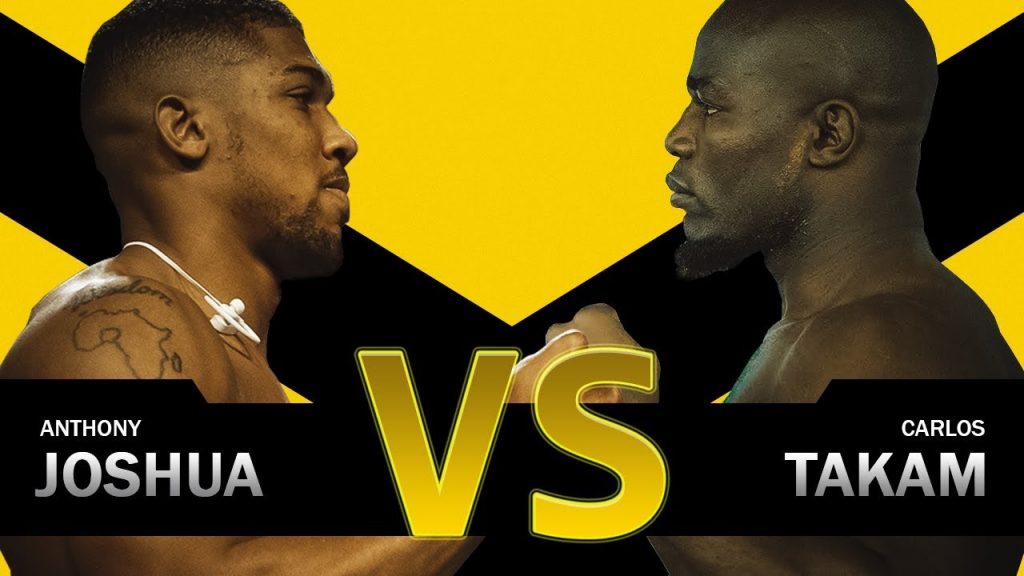 Joshua was set to defend his heavyweight silverware against experienced IBF mandatory Kubrat Pulev. Despite being in line for a bumper £4 million pay day the Bulgarian pulled out. Citing a shoulder injury, he left Matchroom promoter Eddie Hearn scrambling around for a substitute.

Takam was reportedly being lined up for a slot on the upcoming November 4 card in Monte Carlo. So he was in training camp and in decent shape. This is never a given when it comes to some of the heavyweights operating on today’s circuit.

It’s fair to say that Takam’s status as a late-notice replacement is reflected in the betting odds.

AJ is listed around the 1/33 mark with many of the leading UK bookmakers.

Anyone fancying a flutter on Takam can back the French-based Cameroonian at 14/1 with Boylesports or 23/1 on the Betfair Exchange.

While some are expecting Takam to fold within the first three rounds, I envisage the tough African lasting a little longer, possibly into the fifth or sixth round.

A Takam knockout starts at over the 100s and reaches 500/1 in the last round with online bookies generally.

The Joshua vs Takam American odds follow a similar pattern with Joshua -5000 and Takam +1400 at Bovada.

The Cameroon veteran is, therefore, a serious outsider, hence the wide margins with all bookmakers.

There’s a good reason for this – save your money, he won’t be winning this fight.

Joshua cemented his place as the division Number One earlier this year with a stirring 11th round knockout victory over Ukraine’s Wladimir Klitschko. Toppling the man who was consensus ruler of the heavyweights for so long (before losing to the now-inactive Tyson Fury) added much-needed credibility to Joshua’s career.

Despite holding the IBF crown, Joshua’s win over weak title holder Charles Martin, followed by defences against Dominic Breazeale and Eric Molina, were hardly solidifying the legacy. Beating Klitschko changed all of this. Joshua is surely eyeing a big unification with WBC champion Deontay Wilder next summer.

If that cannot be made then WBO champion Joseph Parker would be a decent test. Parker has looked less than stellar in his most recent outings, however. He looked static at times against Hughie Fury in a Manchester defence last month. David Haye will still fancy a chance to force himself into the Joshua mix if he can finally put Tony Bellew to bed in their December rematch.

Tyson Fury versus Joshua has the potential to be an epic stadium-filling blockbuster. However Fury has to be assumed retired until he actually steps back inside the ropes.

This is presuming that Joshua can find a way past Takam, which would be a gigantic shock if he didn’t.

Looking down Takam’s 35-3-1 record, some decent names stand out. However he has always been defeated when stepping up in class. His first defeat arrived in 2009. It was to the fists of then-undefeated, one-time prospect Gregory Tony, who has since been exposed at a certain level.

Carlos strung together a run of wins against lower opposition before claiming a 12-round majority draw in Canada, 2014, against Cuban southpaw Mike Perez. That elevated Takam into a clash with savvy veteran Tony Thompson, whom he defeated, which set up a crack at Russia’s Alexander Povetkin. The former Olympic gold medallist knocked out Takam in the 10th round. However Povetkin’s recent KO wins are being viewed in a different light. This since he has failed numerous drugs tests. This means that, generally, Carlos possesses a solid chin.

He displayed this in his most recent defeat, when challenging current WBO champion Joseph Parker in New Zealand. Takam pushed Parker hard and the Kiwi threatened to fold on a few occasions but managed to see out the distance. Parker later described Takam as a “great fighter who gave me a tough fight”. Takam proved his reputation as a tough gatekeeper, just below world level. He will need every bit of his sturdy chin to withstand the power of Joshua.

The 36-year-old has 27 knockouts on his slate so can clearly bang fairly hard when facing fighters below the championship threshold. He will be giving up around 5” in height though in the Joshua vs Takam fight. Plus he will find himself on the receiving end of a fair few telephone pole jabs from Joshua.

“I think we're going for a 10 to 12 round fight because this guy's head is like a block of cement,” the champion told Sky Sports News. “He is durable. He will become more durable because he'll be in hostile territory.”

Over 70,000 tickets have been sold for the event and it will be interesting to see how IBF Number Three ranked contender Takam copes with such a big event. Both men are former Olympians. Takam competed in the 2004 Athens Games for his native Cameroon, falling to an Egyptian in the last sixteen. Joshua won gold for Great Britain in the 2012 London Olympics.

Respected boxing pundit Steve Bunce has suggested that Joshua’s one main weakness is that he likes to fight too much. In other words, he gets involved in tear ups with fighters he should be using his boxing skills to deal with. This was evident in his big grudge match with Dillian Whyte and to a certain extent, against Klitschko. His head movement and stamina are also both still slight concerns, but it is extremely unlikely that Takam is the man to test either.

Who will win Joshua vs Takam

Overall, I feel that Takam is a reasonable stand-in for only 12 days’ notice. He has competed at the highest level and been competitive. I believe he brings slightly more intrigue than a proposed Dillian Whyte rematch. Despite his toughness, aggressive style and fitness, I foresee Takam wobbled early and walking on to uppercuts, jabs and right hands. He may have tasted the canvas a couple of times already when he the contest is halted, around the fifth or sixth session.

On the undercard: Former Joshua heavyweight rival Dillian Whyte squares off with Robert Helenius for the spurious vacant WBC Silver title. Callum Johnson has withdrawn from his British light-heavyweight clash with Frank Buglioni so Craig Richards has filled the void. Kal Yafai defends his WBA super-flyweight title against undefeated Sho Ishida from Japan and Katie Taylor aims to win her first world title at lightweight.