Home Sports Betting News What are the Strangest Sports around the World?
1.

Sports are the favourite pastime around the world. People simply love enjoying a game of football even if they don’t support the teams playing. Everyone has a favourite sport and team – add betting to the mix, and it’s no wonder why football is the second most important thing out of all unimportant things.

In the UK for example, football is a religion. Clubs such as Manchester United, Arsenal, and Liverpool have millions of fans around the globe who watch the games of their teams with passion.

If you’re not a fan of football, you’ll find the cult following of clubs strange (and we’re sorry for you). If you are, however, you know that you could talk about your clubs for hours with a fellow fan or even an opponent (if not days).

The competitive (and profitable) nature of every sport is what makes them so popular. Under sports, we mean organized leagues and tournaments where teams take part fighting for a trophy (or any other kind of prize).

Trending
No Goals, No Disappointment with the Bore Draw Money Back Offer

Apart from local and national leagues, there are international events between clubs and countries. It’s not just football – basketball, tennis, handball, and many others are included.

Sports were originally invented out of boredom before blossoming into a money machine. Most are played with a ball, of course, but there are sports that rely on a player’s smarts and skills.

Horse racing, for example, is a race where jockeys and trainers try to outwit and outlast their opponents using a horse.

In chess, players rely on their intelligence to defeat players. With so many sports out there, there’s something for everyone to enjoy and that’s the whole beauty of it.

And, while no one will take the throne from football and basketball as two of the more dominant sports in the world, there are some uncategorized sports not even the biggest sports fans have heard of.

We’re entering the world of bizarre and wild that goes as far away from mainstream sports as possible.

If you believe Kabaddi is a strange sport, you don’t know the half of it. There are sports out there that defy logic and are nothing you might expect.

Strangest Sports Around the World

Our list of strangest sports around the world includes some truly bizarre entries no one could have thought of. If you thought Strong Men tournaments are the worst, you’re in for a surprise. From hobbyhorsing (not a typo!) to extreme ironing, the weirdest sports on our list will blow your mind away.

A newer sport invented in Finland, hobbyhorsing is a sport where participants ride stick horses and perform equestrian moves.

Yes, it does sound like a bad video game sim, but it still exists.

We all rode imaginary horses as children but who could have expected it to become a competitive sport?. People in Finland are crazy about it.

Primarily intended for girls, it’s an act of riding those hobbyhorse toys we enjoyed as children. There are even tournaments organized for the newfound sport and its popularity has reportedly spread to Sweden, Russia, and the Netherlands.

We just hope it doesn’t come to the UK – we have better things to do than competing in a tournament while riding imaginative horse heads attached to a stick.

This sport might be even weirder than it sounds. It is played in an improvised court surrounded by a waist-high octagonal wall (usually wooden) where players slap around a ball.

Those that are hit by it below the waist or in the knees are out of the game. The winner is the last man standing.

We used to play something similar jokingly when we were kids, but we never knew it would develop into a sport. However, don’t expect it to hit the Olympics any time soon (we think).

Get your Hogwarts on by playing quidditch!. Originally a fictional sport in the Harry Potter series of books, Quidditch’s popularity fuelled its development into a full-blown sport. This time around, it’s not for witches and wizards only.

Played between two teams of seven players on a hockey-sized rink, all players are mounted on broomsticks but not those of the magical kind.

There are 3 hoops of different sizes and heights on each end – the goal is to get the quaffle (the ball) into one of the opposing team’s hoops for 10 points.

To prevent the ball (we’re not calling it quaffle!) down the pitch, chasers and keepers fight the opposing team’s players with a dodgeball – whoever gets hit is taken out.

The game ends when a seeker catches the opposing team’s snitch – the prize is a nice 30 points.

If you think that quidditch is just a gimmick, there’s a quidditch World Cup organized by the International Quidditch Association. Now if someone would invent magical broomsticks…

Finally, a sport where henpecked husbands can showcase their skills!. 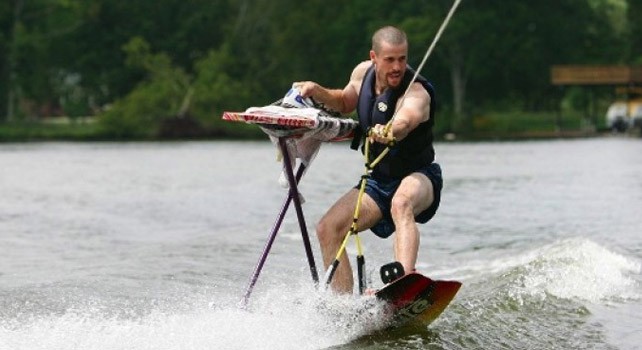 Extreme ironing is just what the title says – ironing in extreme conditions.

This involves taking ironing boards to mountain peaks, middle of the highway, and other extreme conditions.

As the Extreme Ironing Bureau says, it combines the thrill of extreme sports with the satisfaction of a well-pressed shirt. Go figure.

Extreme ironing has its own Wikipedia page and there’s even been a championship held in Germany.

When this develops into a full-blown sport, it will give every man with low physical activity and love for well-pressed shirts the opportunity to become a worldwide sensation.

Now go iron that last load of laundry – it may be worth it later.

Probably the most popular sport on this list, kabaddi enjoys huge fame in India and all over Asia. The Indian Pro Kabaddi League is the world’s top kabaddi league with 8 franchise-based teams and millions paid in salaries.

The League is constantly expanding and rising in popularity. There are hundreds of millions of viewers in India turning in each season to watch the Bengal Warriors (current champions) or Patna Pirates (record holders with 3 titles) defeat their opponents.

When it comes to the sport itself, we can’t think of anything that comes closer to it than Tag.

Two teams of seven players compete in a match where one player (attacker) must go to the opposing side and tag out as many players as he can without being tackles himself. It’s truly as strange as it sounds, but we can’t argue that it requires serious physical strength and skills.

Combining chess and boxing is not something that would cross our minds even in our wildest dreams. However, the sport truly exists and it’s not in a fictional reality.

It is especially popular in Germany and involves two fighters in a standard ring alternating between rounds of chess and boxing.

It’s fair to say that it takes a fighter’s physical and mental skills to extreme lengths.

Originally invented by a Dutch artist as an act performance, it spread like wildfire to Germany and India, the UK, and Russia later. If you ask us, we’d certainly watch such a magnificent test of human skills.

The UK has always been a breeding ground for unusual sports and cheese rolling is the latest in line.

It involves a group of people chasing a wheel of cheese down a hill and it’s more dangerous than it sounds – injuries are reported each year.

The competition takes place every year at Cooper’s Hill near Gloucester with people from all over the world taking part.

If you’re wondering what kind of cheese is rolling down that hill (never thought we’d write that sentence) it’s Double Gloucester made by milk from the rare Gloucester cattle.

It may be dirty, but you at least get a premium wheel of cheese if you’re lucky enough to get it.

There are bizarre sports all over the world and then there are some which are truly…unnecessary?.

Underwater hockey ranks high on that list. The latest in line of hockey variants, ice hockey (also known as Octopush!) is played between two teams underwater pushing a puck using a stick in a pool. You know, just like in hockey if the ice rink melts down.

In 1980, underwater hockey got its first World Championship and it’s regularly held every two years. The next one in line, which will be the 21st, will be held in Australia.

Wrestling is quite a popular sport that spawned different variants such as arm wrestling. However, no one expected toe wrestling to be the next in line.

Just like the name suggests, it involves two people locking their feet and attempting to pin each other’s foot in a manner similar to arm wrestling.

Last year, current toe wrestling champion Alan Nash bought the rights of the sport and looks to widen its horizon. Up until now, events took place in the UK only, but Nash has plans to bring it to Asia. We’re sure it’ll be a blast there as well.

In Persian, Buzkashi means “goat pulling” and that’s probably the most accurate description of a sport that gives the word bizarre a whole new meaning.

It’s a “game” where players mounted on a horse try to place a calf or goat carcass in a goal.

Originally invented in China and Mongolia somewhere around the 10th century, it later took the Middle East by storm.

Games of Buzkashi are regularly played among Central Asian ethnic groups nowadays and are not likely to become popular outside of that region (we sincerely hope so).

After all, who would drag a dead goat on a horse around the field and try to score a goal with it?.

If you fancy checking out the odds on any of these strange sports then the bookmakers below will cater for your needs. You will find latest odds on some of the sports listed above like Kabaddi.