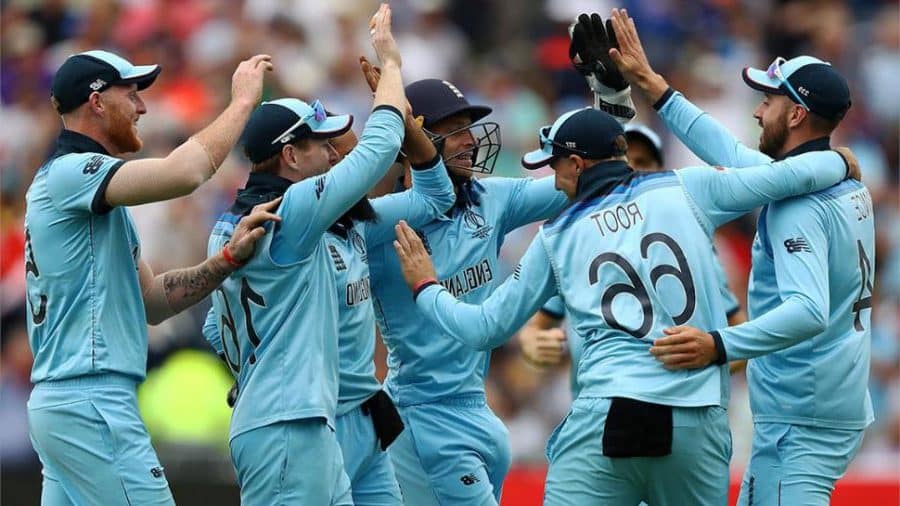 England shut out five-time champions Australia's chances of reaching their seventh World Cup finals when they thrashed the men from Down Under by 8 wickets at Edgbaston on Thursday.

Batting first, the normally formidable pair of Aaron Finch and David Warner were back in the pavilion with the scoreboard reading just 10.

Finch was trapped LBW by Joffra Archer without scoring while Warner edged one from Chris Woakes to keeper Jonny Bairstow while on 9.

Peter Handscomb, coming in for the Usman Khawaja didn't last long, bowled by Woakes for 4.

Archer, generating a lot of pace and hostility, dislodged Alex Carey's helmet with a bouncer leaving the Aussie keeper bleeding from the head. But Carey braved the blow to join Steve Smith, who played a captain's knock of 85 and put up a fighting stand of 103 for the 4th wicket before he was dismissed for a heroic 46 from 70 balls.

Marcus Stoinis fell immediately to Rashid for a duck leaving the Aussies tottering at 118-5.

Glenn Maxwell and Mitchell Starc looked to salvage the innings but couldn't make an impact getting out for 22 and 29 respectively.

With Maxwell gone with the score reading 157, the lower half capitulated without much resistance and the Aussies were skittled out for 223. Woakes was the pick of the bowlers with 3-20 from his 8 overs. Archer 2-32 and Abdul Rashid 3-54 also helped in restricting Australia's scoreline that didn't seem too threatening by any means.

If the Australians were banking on their champion bowler Mitchell Starc to reciprocate what English bowlers did to them, they couldn't have been more off the mark.

Openers Jason Roy and Jonny Bairstow played with the kind of fearlessness that has personified English batting in the tournament. Jason Roy, was especially ruthless, scoring 85 from just 65 balls. His innings included 5 sixes, three of which came from just one over of Steve Smith.

By the time the first England wicket fell at 124, which was Bairstow's for 34, the writing was already there on the wall. Roy went with the score at 147 and it was left to Joe Root and Eoin Morgan (49 and 45 not out) to put the finishing touches to what was a very emphatic win.

For the final game at Lords, England now meet New Zealand who have come out of a nail-biter with India in the semi-finals. Both teams will be vying for their First World Cup titles with England featuring in their 4th final appearance, their previous attempts being in 1979, 1987 and 1992. For New Zealand it will be their second entry into the final stage and a consecutive one after their defeat to Australia in 2015.

The Lord's final will be part of a bumper day for British sports that will also feature the Wimbledon men's final and the British Grand Prix at Silverstone.