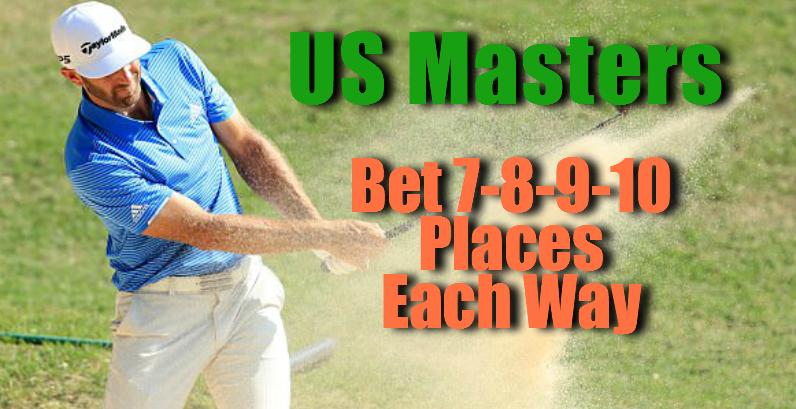 With the gusto and paraphernalia that heralds the first major of the year comes the US Masters Golf. Most people love to watch out for the thrills, the rookies, the veterans and the favourites. What is most important though are those who make the top ten. The one that wins the green jacket for the 81st edition of this prestigious event.

Tiger Woods will be missing the US Open again due to injury. This might have been a shade bit disappointing to some. However the news that Jason Day would be making the cut after getting over some family issues will come as positive news to both neutrals and bettors. The current holder, Danny Willet, was an outsider ranked at No. 27. He went on win with no small thanks to a late implosion of early favourite Jordan Spieth. A similar incidence can’t be entirely ruled out. This is given credence by a number of different winners the competition has churned out over the years. Also it's worth noting that only three men have won at Augusta back to back, one of which is Tiger Woods.

Looking at the field of 94 contestants who will be teeing off on Thursday, we will be taking a look at 10 of the favourites going in. We will also look at a few of the outsiders. We will be consulting Opta stats to look closely at how they have performed at this prestigious event.

Dustin Johnson placed a T4 last year but is the form player going into the Masters having won three straight PGA Tour events and would be only the second golfer since 1950 to win four on the trot and the other obviously being Tiger Woods if his bid is successful. The World no. 1 is ranked at 11-2.

Jordan Spieth is to some the odds on favourite to win this year’s Masters. Given the way he’s taken to the greens in Augusta over the past three years since he rose to prominence. He has at least a top two finish during this period including the not so impressive implosion from last year. However given his young age, there will be more titles to play for. There are few other formidable names who will be better placed come Sunday. The Texan is ranked at 7-1.

Rory Mcllroy has conquered all the majors except for the greens of Augusta. It remains difficult to understand that but many observers point at his putting as his weakness. His best finish remains fourth in 2015. However he remains a favourite given his achievements and wins at Majors. The Northern-Irish man is also ranked at 7-1.

Justin Rose remains one of the favourites and if his form going into 2015 is repeated where he was tied for second then he should be one of the fancied players going into Sunday. He should easily make the top five. He is ranked at 30-1.

Phil Mickelson remains a contender given he has won the competition thrice with the latest one being in 2010. He is not getting younger. At 46, he will be counting on his experience to see him through the preliminary rounds and be in contention come Sunday. Winning will bring the ‘Leftie’ level with Tiger woods. He will only be behind Jack Nicklaus on four and you can back him at 18-1.

Hideki Matsuyama has been nothing short of exciting ever since his rise to prominence with his swing been one of the most appealing sides to his game. Finishing T7 last year and fifth the year before, he is a favourite to finish in the top 10 once again but it remains to be seen if he has the fortitude needed to win the competition. However, with two wins and two runner up positions this season is a testament to the tag thrust on him as a challenger for the title. The Korean can be backed at 22-1.

Adam Scott won the tournament back in 2013. However he has consequently failed to replicate such form. He remains one of the names being touted as a contender. A feat he has failed to match since his solitary win 4 years ago. Opta stats reveal his best finish since then has been a 14th place which was tied and it would be a miracle if he manages a top 5 finish. He is priced at 35-1.

Bubba Watson has won two of the previous five Masters and having won the last of the pair in 2014, he finished a joint 21st at the 2015 PGA Championship which has proven to be his highest at a top-tier competition. He is also priced at 35-1.

Rickie Fowler has managed a T5 at Augusta in 2014 and this remains his best finish and given it has taken an European player 17 years to win the Masters, a repeat in quick succession will be nothing short of a miracle given the caliber of non-European players among the favourites. He will be looking for his first major win in his 29th appearance. He has not had a top 10 finish in any of his last eight. Rickie Fowler can be backed at 20-1.

The US Masters Golf 2017 Outsiders

Now we will take a look at the sleepers and the outsiders. It will be particularly interesting if these two lists don’t contain the eventual winner;

Jon Rahm has risen to prominence over the past 12 months. Especially considering the fact this will be his first appearance; the expectations are a bit intense. He has spoken of learning from Phil Mickelson whose brother, Tim, coached and now manages the young Spaniard. Even the neutrals can’t help but notice when your odds are slashed more than 5 times over. If he manages to ride the waves and win on Sunday, it will have been the 60th birthday of Seve Ballesteros, his late compatriot. Having won the Farmers Insurance Open in January and finished runner-up to Dustin Johnson at the WGC Dell Technologies Match Play last month with two other top 5 finishes all in the first quarter of the year. A top ten finish should be in cue if expectations are to be tempered. The 22-year-old Spaniard can be backed at 18-1.

Jason Day has overcome some domestic challenges owing to his mother’s sickness to play in the tournament and he is a player you won’t want to bet against on his day even as he has admitted to being underprepared for the tournament. Having secured a top ten finish in 52% of his major appearances, his T2 at his first Masters in 2011 remains the best for the golfer who idolizes Tiger Woods. The 29-year-old American can be backed at 16-1.

Danny Willet has seen his stock plummet since he won here last year and it remains to be seen how he will fare but going by the bookmakers, things don’t look too good. Winning the green jacket since Jose Maria Olazabal in 1999 bears a testament on its own. However  it remains to be seen if he won’t be just another flash in the pan. Especially with his Ryder cup experience in hindsight. It would be premature to write him off though and with no major expectations on his shoulders, this might just be to his advantage. He is currently priced at 100-1.

Henrick Stenson finally won a major last year, The Open Championship. The Masters has not been his strongest suit though with his best being a 14th place finish and failing to make the cut in Houston. He might be well poised to have his best showing at the Masters this time around. The Swede can be backed at 32-1.